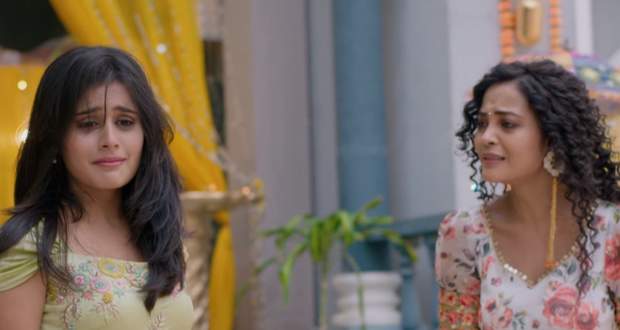 Today's YRHPK 14 Feb episode starts with Parul asking Nidhi to not say anything to Jasmeet. Nidhi asks her not to be like Meenakshi and order things around.

Ketki says she can’t do everything alone and therefore Kuhu has sent two ladies. Abir and Kunal are disguised as ladies to enter the Haldi function at Maheshwari house.

Kunal and Abir are going there to surprise Kuhu while Mishti tries to find the court notice in Kuhu’s cupboard. Later, Kunal and Abir arrive in their lady's attire and dance in the function.

Varsha asks Parul to bring Meenakshi as she is Kunal’s mother too. Nidhi acts weird hearing this while Jasmeet doesn’t like Kuhu hugging Parul as she is a servant.

Kunal and Kuhu share some romantic moments while Jugnu showers rose petals on them. Meanwhile, Abir also enters Mishti’s bathroom and they share some sizzling romance.

Kuhu thinks everything will be fine now. Kunal wants Kuhu to listen to him while Jasmeet learns that Kuhu is getting a divorce from Kunal. Varsha also overhears this and gets upset. Kuhu gets upset with Mishti and slaps her.

© Copyright tellybest.com, 2018 & 2019. All Rights Reserved. Unauthorized use and/or duplication of this material without written permission from tellybest.com is strictly prohibited.
Cached Saved on: Sunday 5th of April 2020 01:45:01 AM