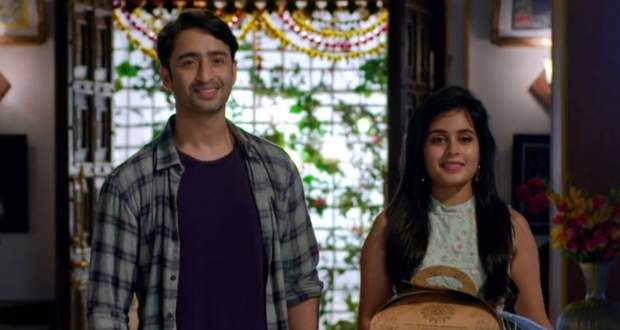 Today's YRHPK 14 Jul episode starts with Meenakshi hearing a knock on the door. She thinks it’s Abir but Parul has come to wish her birthday. Parul tries to make Meenakshi happy by stating Abir will be back soon.

Meenakshi is scared that Abir might never return back. At the same time, Jugnu tells Meenakshi that Kaushal has caught an electric shock.

Meenakshi and others arrive downstairs to see Kaushal lying on the ground. However, it is Jugnu and Kaushal’s plan to surprise everyone with Abir and Mishti’s entry into the house.

Everyone in the house gets thrilled, and Meenakshi cuts her birthday cake. The party poppers scare Mishti, and she starts shouting. She rushes to her room while Abir follows her.

Kuhu suggests Mishti is just doing drama to seek attention. Meanwhile, Mishti is really scared and Abir tries to console her. They hear sirens of a police van at the same time, and Mishti again gets scared.

The police ask for Mishti and Abir wants Mishti to stay in her room. Abir wishes to talk to the police in private while Meenakshi wants to know what’s wrong.

Kuhu brings Mishti downstairs while Abir gets mad at her. Mishti is about to confess when police give the purse Mishti might have left somewhere.

Abir tries to cover up her and Mishti’s reaction. Later, Mishti remembers the night of the incident and gets upset. Abir surprises her with dinner and tries to calm her again.

Kuhu and Jasmeet talk ill about Mishti and Jasmeet want her to get Abir on her side. In the morning, Abir is happy that Mishti is sleeping peacefully.

Meenakshi has made breakfast for Abir and Mishti while Ketki wants to tell about her marriage. Meenakshi is about to make Abir eat the breakfast when Jugnu says Mishti is searching for Abir.

Abir rushes to calm Mishti who is again suffering from a panic attack.

© Copyright tellybest.com, 2020, 2021. All Rights Reserved. Unauthorized use and/or duplication of any material from tellybest.com without written permission is strictly prohibited.
Cached Saved on: Saturday 23rd of January 2021 12:16:18 PM