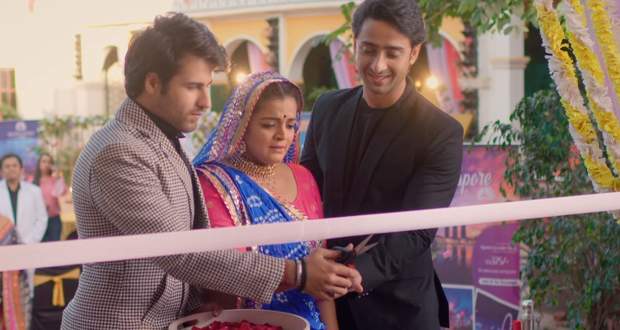 Today's YRHPK 14 Mar episode starts with Abir apologizing for his mistake and feeds her cake. Mishti asks Abir to teach her how to keep the family together.

Abir says she will learn from her instinct and that he is always with her. Later, Parul starts cleaning the front of the house while media calls Parul a servant.

Mishti stands up for Parul and Kuhu calls her family member. Meenakshi arrives and introduces Mishti as the new owner. Meenakshi praises Mishti while Mishti gives back the company to Kunal as he has worked hard to build it.

Kuhu asks who will launch the company and Meenakshi declares that the company is on Kunal and his mother will re-launch the logo. Later, Mishti makes Kunal realize that Parul has sacrificed a lot and should be honored.

Mishti also gifts Parul a beautiful saree and is of the same color as Meenakshi. The media interviews Parul while Meenakshi again entices Kuhu against Mishti.

Maheshwaris are also welcomed in the function while Rajshri and Varsha show they are proud of Mishti’s decision. Later, Abir hopes Kunal will honor Parul while Kunal asks for Meenakshi’s support in his decision.

Kunal gives the honor of inaugurating the logo to Parul and reveals that she is his mother. Maheshwaris are shocked to learn this while Abir and Mishti get happy.

Abir compares their situation with Krishna, Devki and Yashoda’s story while Meenakshi is still upset with Kunal’s decision but doesn’t show it. Parul cuts the ribbon and launches the logo with Kunal and Abir.

© Copyright tellybest.com, 2018 & 2019. All Rights Reserved. Unauthorized use and/or duplication of this material without written permission from tellybest.com is strictly prohibited.
Cached Saved on: Monday 30th of March 2020 06:21:28 PM