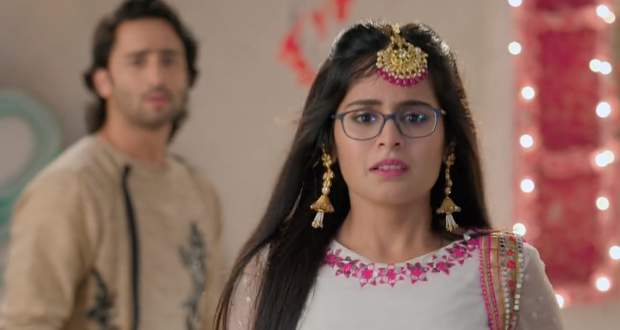 Today's YRHPK 15 Aug episode starts with Kuhu arriving at Rajvansh house to meet Kunal. She begs Kunal to not break the marriage. She further pleads in front of Meenakshi to not break the wedding.

Abir assures the wedding will not get suspended. He says Maheshwari's respected their privacy and never asked about their father.

Later, Meenakshi arrives at Rajvansh house with Kuhu. She says she will not break the relation for her son’s happiness.

She further proposes a condition in front of Vishambhar. She wants Mishti to stay away from the marriage or else she will call off the wedding.

Mishti wishes to leave for Mumbai but Vishambhar tells her to go the next day. Later, Abir comes to meet Mishti in her room through the window.

Without uttering a word, he hugs her. Abir asks why she said all that to hurt her family. Mishti again lies and says she is not a part of Maheshwari family. Abir senses she is lying and asks at least for a hint.

Later, Meenakshi declares the Maheshawaris will keep on waiting for the groom but Baraat will not arrive at their doorstep.

Mishti gets upset to leave her family on the wedding day.

© Copyright tellybest.com, 2018 & 2019. All Rights Reserved. Unauthorized use and/or duplication of this material without written permission from tellybest.com is strictly prohibited.
Cached Saved on: Saturday 1st of February 2020 01:03:32 AMCached Disp on: Wednesday 19th of February 2020 12:59:35 PM