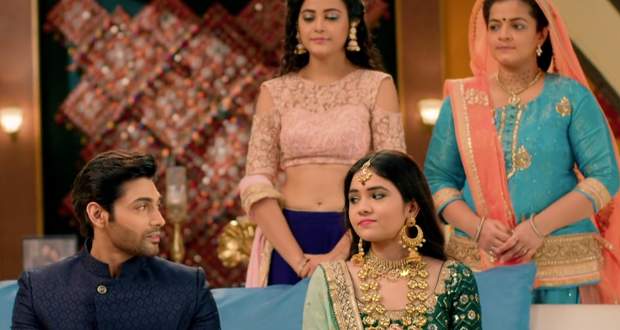 Today's YRHPK 16 Jul episode starts with Abir asking Mishti if she is okay. Abir thanks the guy who saved Mishti. The guy shouts at the truck driver and asks Mishti to be careful.

Abir gets impressed by the guy and later learns that he is the one getting engaged to Ketki. Meanwhile, Meenakshi is upset with Kuhu for spiking Abir’s coffee.

She is further mad at Mishti and Kuhu for creating drama in the house. She also instructs everyone to be present for the lunch on the dining table.

At the same time, Abir and Mishti return along with Varun. Varun meets everyone in the family while later he reveals that he saved Mishti from getting under the truck.

He says he was just joking and that he met them in front of the house. Varun again makes an inappropriate joke and makes everyone uncomfortable.

Later, Ketki tries to make things right between Mishti and Kuhu. Nidhi comes into the room and wants Mishti to take rest and stay away from preparations.

Meenakshi asks Mishti to rest and not leave the rituals in the middle. Mishti says she has made mistakes and acts weird again. Abir arrives and handles the situation.

Varun’s family arrives and Meenakshi asks Mishti to welcome them and do the Aarti. Mishti is hesitant in doing the Aarti while Abir makes Mishti calm.

Varun’s mother is happy and remembers the harsh memories from the past. Nidhi reveals that Varun’s brother died in an accident three months ago.

Mishti gets scared to hear the story and remembers her own past. She is asked to bring water but in a hurry she bumps the jug into Varun’s head.

Upcoming Yeh Rishtey Hai Pyaar Ke episode update: Abir asks Mishti to keep the past to herself while Kuhu overhears them.

© Copyright tellybest.com, 2018, 2019, 2020. All Rights Reserved. Unauthorized use and/or duplication of this material without written permission from tellybest.com is strictly prohibited.
Cached Saved on: Wednesday 28th of October 2020 12:09:04 AM