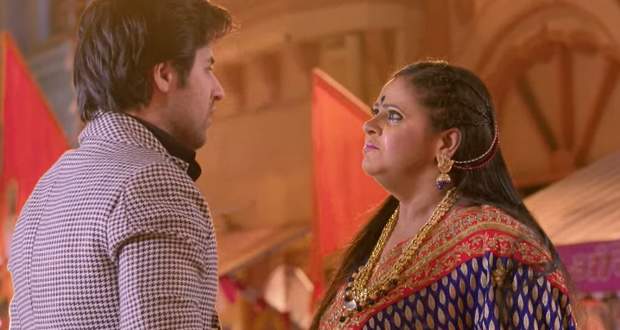 Today's YRHPK 16 Mar episode starts with the media asking of Varsha knew the truth before. They further harass Meenakshi with questions regarding Kunal being illegitimate.

Mishti offers to help but Meenakshi leaves. Kuhu follows her and tries to explain she didn’t know anything. They both blame Mishti for the situation while Meenakshi leaves in a car.

Mishti and Abir talk about Kunal giving the right to Parul. Mishti shows her happiness and Jasmeet overhears this. Mishti further is worried about her family handling the news.

Shaurya and Vishambhar are upset that Rajvanshs was hiding such a big truth. Kunal rushes to find Meenakshi while Vishambhar asks the whole story from Yashpal.

Mishti thinks Abir should have told Meenakshi before while Abir is sure Meenakshi would have controlled Kunal’s actions. Meanwhile, Jasmeet entices Kuhu against Mishti while Varsha asks Kuhu to go find Meenakshi.

Meenakshi is near the temple and is upset about the situation. She is about to fall when Kunal saves her and calls her Maa. Kunal apologizes to Meenakshi while she feels lonely and asks Kunal to go to his real mother.

Kunal reaches home while Yashpal asks Meenakshi to be with Kunal. Meenakshi reaches home and gets upset to see Kunal and Parul getting their picture clicked.

Meenakshi gets upset with Abir for taking such a big decision without her consent. Abir is confused about why she is embarrassed while Meenakshi accuses Mishti of bringing Mehul back in their lives.

Abir is thankful Mishti brought the truth out about Mehul and wants Meenakshi to also accept the truth. Meenakshi decides to bring the truth of Kuhu and Mishti out in open.

© Copyright tellybest.com, 2018 & 2019. All Rights Reserved. Unauthorized use and/or duplication of this material without written permission from tellybest.com is strictly prohibited.
Cached Saved on: Wednesday 8th of April 2020 08:48:32 PM