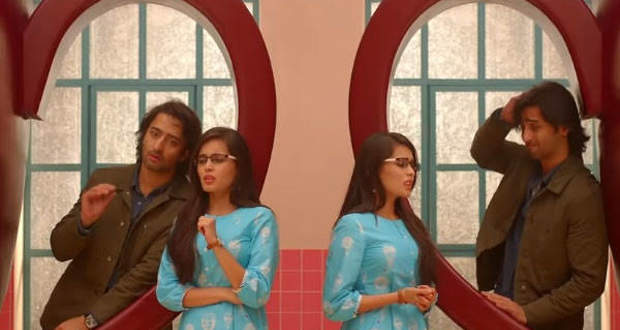 Today's YRHPK 16 May episode starts with Kunal and Mishty. They both are trying to see Abir’s master painting, but Kunal messes up with the wrapping cloth. Mishty laughs on Kunal’s silliness. Kunal keeps away the painting.

Kunal apologizes to Mishty for behaving irrationally. Mishty also apologizes for her mistake. Kunal gifts her a dress. He also gives the bill to Mishty and says in case she wants to change the dress.

Mishty proposes the idea of going shopping together so that they can learn more about each other, but Kunal turns her down.

Abir is looking for Mishty’s painting. He couldn’t find it anywhere. He asks Jugnu about the same. Jugnu tells that he gave the painting to the NGO lady. Abir rushes to hide the painting.

Abir bumps into Meenakshi while heading towards the exhibition. Meenakshi was holding a painting which will reveal the Naman tried to kill Naitik, falls down. Abir picks up the painting and questions about it. Meenakshi tricks him by diverting the topic. Abir leaves Meenakshi and reaches Exhibition.

Nanu is looking for Abir. He finds Mishty’s pictures in Abir’s room. He couldn’t understand the reason behind it.

Sughania family reaches the exhibition. Meenakshi wants to place Naman’s painting the exhibition. She plans to make Mishty and Kuhu dance and in the meantime, she would replace the painting.

Meenakshi asks Mishty to prepare a dance performance for the exhibition with Kuhu.

Parul understands Meenakshi’s ploy. She asks Meenakshi to spare the exhibition. Meenakshi says that he would help Abir raise money, but now, she has to protect Kunal from Mishty.