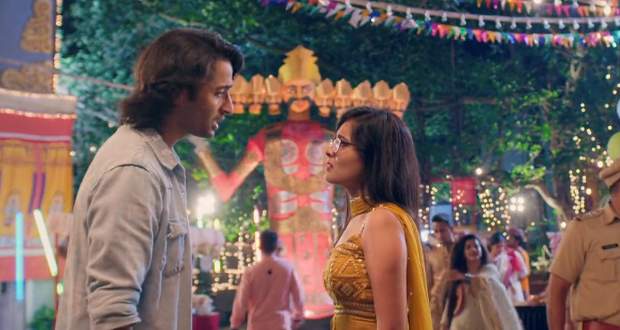 Today's YRHPK 16 Oct episode starts with Mishti opening the door to find Abir on the other side. Maheshwaris get delighted to see Kuhu while Varsha enquires about Kunal.

Meanwhile, Yashpal wants Meenakshi to make things right while Nishi comes and declares a robbery has taken place at their home.

Meenakshi tries to explain she has not seen the necklace while Mehul thinks Meenakshi is trying to trap him and throw him out of the house.

Meenakshi calls Mehul unlucky for her and her family. At the same time, Kuhu wants Mishti to go with Abir while Rajshri tells them to return soon.

Meenakshi is out to do some work while Mehul also tells Abir he has to meet a friend. Meenakshi reaches the same Dussehra ground as Abir and Mishti and gives money to someone.

Also, the head of the villager who attacked at Abir’s birthday party is given the necklace by Mehul. He had actually taken the necklace from the table and got himself attacked.

Abir tries to console Mishti and explains his family situations. He doesn’t want Mishti to worry about the actions of his family members.

Mishti thinks Abir is leaving her and thinks he is going to break up with her. Abir decides to follow his father’s advice of leaving Rajvansh house but is unable to tell Mishti.

He later tells her that they should live in a different house after marriage.