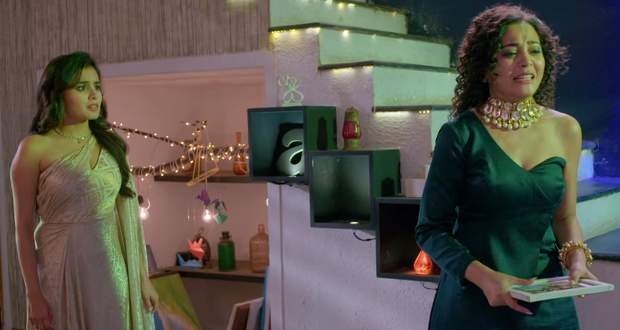 Today's YRHPK 17 Mar episode starts with Mishti finding broken frames in her room. She finds Kuhu in the room who accuses her of destroying her life by snatching the Rajvansh name from her.

Kuhu asks Mishti to leave her life while Mishti gets upset. Meanwhile, Kunal makes Meenakshi’s favorite food and orders Khandvi for her.

The Khandvi is wrapped in a newspaper wherein Parul and Kunal are in the front. Elsewhere, Mishti complains about Kuhu to Abir while Abir is not ready to listen.

Kuhu is mad at Kunal for taking such a big decision with Mishti’s opinion. Kunal reveals he never talked about the situation with Mishti and apologizes for hurting her family.

He further asks for her help to deal with his current situation. Kuhu asks Kunal to stop taking Mishti’s advice while Kunal gets frustrated with her blaming Mishti.

He gets angry when Kuhu mistrusts Abir’s judgment of people. Later, Abir is frustrated and makes paintings while Parul makes him realize that he needs to concentrate on his relation with Mishti.

Mishti learns that Abir is going to sleep outside. Abir comes into the room but they both don’t speak to each other. Abir doesn’t leave Mishti’s hand in the morning but takes another girl’s name.

Mishti gives a bird to Abir while Abir gives the frames to her. Mishti is still upset with Abir’s judgment and thinks they are losing.

Meanwhile, Jasmeet reveals that Varsha is upset and says Kuhu is not even a Rajvansh. She suggests that Mishti might throw Kuhu out of the house. Rajshri is sure that Abir and Kunal will never fight.

© Copyright tellybest.com, 2018 & 2019. All Rights Reserved. Unauthorized use and/or duplication of this material without written permission from tellybest.com is strictly prohibited.
Cached Saved on: Wednesday 8th of April 2020 08:28:32 PM