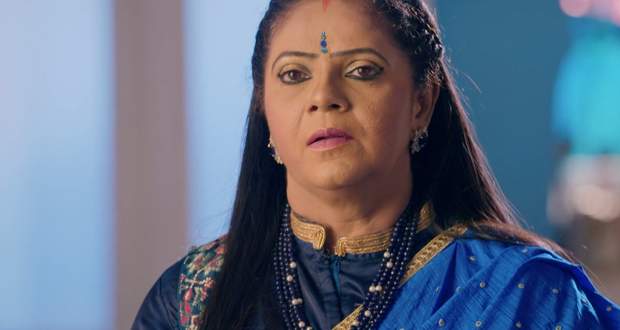 Today's YRHPK 17 Oct episode starts with Abir asking Mishti to live in a different house after marriage. Mishti doesn’t find it right while they decide on talking outside.

On their way outside, Mishti sees Mehul and also finds the necklace which was worn by Meenakshi on the Dandiya night in his hand.

Kunal gets restless in the office thinking about Kuhu and later gets mad at his employees. He further fumes in anger to see the video of Mishti slapping him with one of the employees.

Mehul makes up a story and says he came to find the necklace. Mishti says they should thank the management while Mehul again does drama of being sick.

Abir accuses Meenakshi while Yashpal wants her to speak up. Later, Kunal meets Kuhu and wants some support. However, Kuhu refuses to help him and leaves.

Mishti gets suspicious of Mehul’s actions and later says they have decided they will stay with family after marriage. Mehul still tries to inflame Mishti against Meenakshi.

Meenakshi and Yahspal arrive at Maheshwari house along with Parul to fix Mishti and Abir’s relation. She also wants to fix their engagement date.

Mishti and Abir arrive and get shocked to listen to her words.

© Copyright tellybest.com, 2018 & 2019. All Rights Reserved. Unauthorized use and/or duplication of this material without written permission from tellybest.com is strictly prohibited.
Cached Saved on: Sunday 2nd of February 2020 12:48:22 AMCached Disp on: Thursday 20th of February 2020 07:44:05 PM