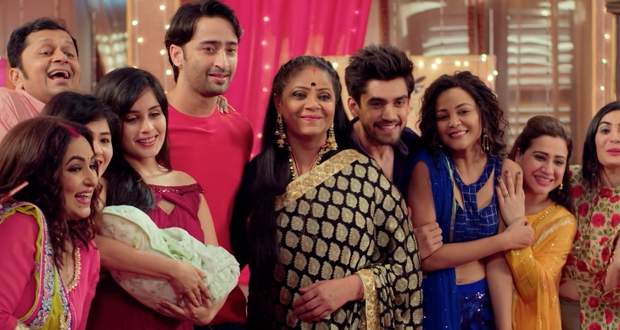 Today's Yeh Rishtey Hai Pyar Ke (YRHPK 17 Oct episode starts with Kuhu and Kunal romancing and spending some quality time together. Kunal wants Kuhu to name the baby after his name while Kuhu makes fun of him.

Abir rejects Mishti’s suggestions of names and later gets mesmerized to see her. Their romance is interrupted by the crying baby and they feel blessed to have the child in their lives.

Kaushal and Ketki also come for the function while Mishti and Abir also come down along with the baby. Mishti takes the blessings for the baby from Mata Rani.

Abir and Mishti receive a gift for the baby from Kuhu but it is originally from Meenakshi. Meenakshi has made Dandiya using clothes for the baby while Mishti gets happy.

However, Abir continues to ignore Meenakshi and doesn’t forgive her. He refuses to dance with Meenakshi as well. Later, Meenakshi witnesses Mishti and the baby in danger and rushes to save them.

She gets injured in the process while Abir rushes as he gets worried for her. The doctor says she will gain consciousness soon while Abir asks Mishti about her health.

Meenakshi wishes to see Mishti and the baby while Parul and Kunal try to console Abir. However, Abir is not ready to listen to them. Mishti also tries to make him realize that he cares about Meenakshi and that he should forgive her.

Abir refuses to listen to Mishti while later goes to check on Meenakshi. Later, Yashpal aka Naanu arrives in the house and Abir gets extremely happy to see him.

Naanu gives blessings to the baby and also meets Meenakshi. Kuhu says the baby should be named Amish and Abir knows the name is given by Meenakshi. Abir says the one who has kept the name should tell the name to him.

He asks Meenakshi to tell the name of the baby and further apologizes to her. They reconcile their differences and soon Kunal clicks the family picture.