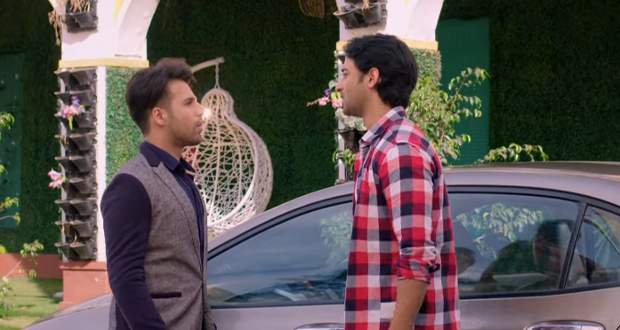 Today's YRHPK 18 Mar episode starts with Parul and others asking Meenakshi to not work in the kitchen. Meenakshi says her place is now designated by the family.

Meenakshi also asks Kunal to teach the business techniques to Parul. Kunal asks Meenakshi to go to the office while others in the family also request her. Meenakshi agrees to go while Kunal apologizes to Parul as well.

Mishti goes to give the coffee flask to Kunal while Kuhu goes to give breakfast to Abir. Kuhu asks Abir about his worried state while Abir is upset with Mishti’s behavior.

Kuhu accuses Mishti of complaining against her while Mishti knows Kuhu must be blaming her for everything. Kuhu and Mishti bump into each other and fall on the floor. Abir leaves with Kunal to get rid of the drama at home.

Mishti and Kuhu continue to fight and later learn that Abir and Kunal have gone to see a movie. Meanwhile, Meenakshi is upset with the situation and gives a secret task to Laxman.

Abir takes Kunal to drink tea and discuss Kuhu and Mishti’s fight. Abir wants to do something about them while they get kidnapped by some goons.

Later, Mishti receives a call from goons and reveals they have kidnapped Abir. Mishti thinks he is playing a prank and threatens never to call. Kuhu also receives a similar message while Mishti continues to think it is a drama.

Mishti learns that some kidnappers are roaming in the city and are not able to reach Abir and Kunal’s phone.

Upcoming Yeh Rishtey Hai Pyaar Ke episode update: Mishti and Kuhu will threaten the kidnappers and will be pushed in a swimming pool.