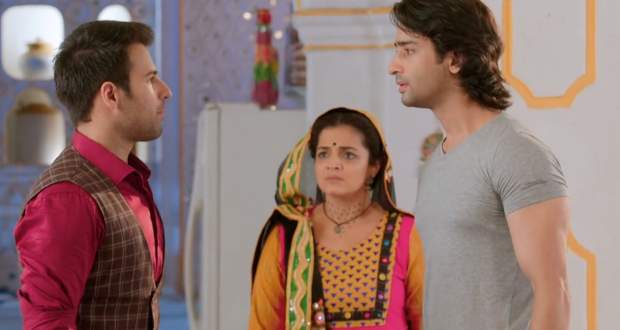 Today's YRHPK 18 Sep episode starts with Meenakshi trying to console Kunal about patching things up with Abir. Abir is also preparing noodles for Kunal to pacify him.

Meanwhile, Mishti asks Rajshri about the first one to do love marriage. Mishti further wishes to hear the story of the prince while Rajshri tells about Shankri Tai finding a girl for Abir.

Later, Abir tries to pacify Kunal and says he wants his support forever. Parul tells Kunal that Abir has made noodles especially for him.

Kunal enquires why Abir was unable to choose between him and Mishti. Later, Kuhu is unable to unlock Kunal’s phone and gets to know that Abir is going to talk to Vishambhar about Mishti.

Mishti wishes to meet him one last time secretly while Kuhu decides to reveal her secret. Meanwhile, Jasmeet and Varsha try to get Rajshri and Vishambhar out of the house to reveal Mishti's secret.

Abir comes to meet Mishti in her lawn and offers her noodles. At the same time, Kuhu suggests Kunal talk to Abir instead of fighting.

She further tells him that Abir has taken the noodles for Mishti. Meanwhile, Abir and Mishti are discussing the problems they might have to face due to their relationship.

They promise to remember their love forever and Abir kisses her forehead. The scene is witnessed by Vishambhar who calls out for Mishti in anger.

© Copyright tellybest.com, 2018 & 2019. All Rights Reserved. Unauthorized use and/or duplication of this material without written permission from tellybest.com is strictly prohibited.
Cached Saved on: Thursday 30th of January 2020 07:58:07 PMCached Disp on: Thursday 20th of February 2020 04:49:47 PM