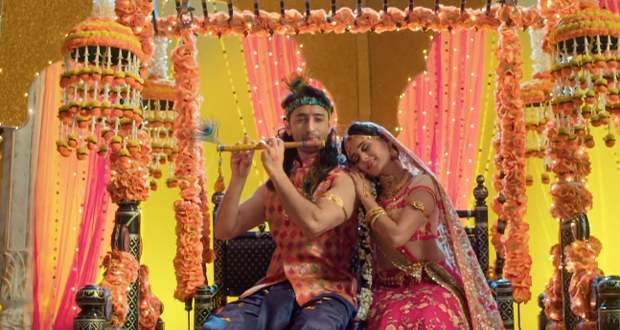 Today's YRHPK 19 Aug episode starts with Kuhu admitting her mistake of spoiling the Jhanki. Mishti doesn’t fight with her and asks her to get ready. She takes the responsibility of fixing the Jhanki.

Meanwhile, Abir and Kunal show their brotherly love while Meenakshi is happy to see them together. She wishes that they also get children and get blessed like she is blessed.

Mishti tries to fix the Jhanki while Varsha continues to blame Kuhu. Rajshri arrives and asks them to not worry as Vishambhar has got a beautiful Jhanki from Asha Kiran stall.

Mishti gets excited to see it while later Abir reveals his skit. He further reveals that the money they will get from the sponsors will go for the education of poor kids.

Abir and Mishti give a special Radha-Krishna performance while Kuhu and Kunal give the interview and pose for the photoshoot. They get impressed with Abir and Mishti’s dance and click their pictures as well.

Kunal and Kuhu give the interview while Abir and Mishti spend some romantic moments together. Later, they gather for Pooja while Meenakshi wishes to have grandchildren.

Abir recites emotional poetry for his future son or daughter but also wants to know what Mishti feels. Kuhu and Kunal come at the same time to show the pictures for the magazine.

The next morning, Abir is shocked to see his and Mishti’s photograph on the cover page. Abir and Mishti try to hide the magazine while Kuhu arrives fuming in anger with the magazine.

She blames Mishti for always stealing the limelight and wishes to get the center stage someday while Mishti is crying in the corner.