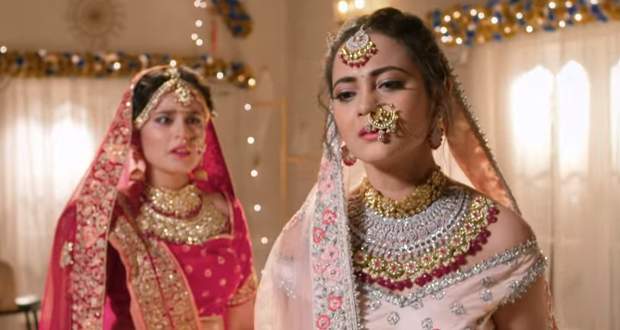 Today's YRHPK 19 Feb episode starts with Kuhu offering Bangle set to Mishti and getting jealous of her. Meanwhile, Meenakshi gives the responsibility of tying Pagdi on Abir and Kunal’s head to Parul.

Parul wants her to be part of Kunals’ marriage while Meenakshi feels thankful. Elsewhere, Abir offers to help Kunal in expressing his love for Kuhu.

Kuhu and Mishti continue to argue over their rights on Rajvansh family while Abir is not convinced to have Meenakshi in his marriage.

Jasmeet entices Kuhu as Mishti will get married first and there is only half an hour Mahurat. At the same time, Abir feels guilty for not including Meenakshi in the marriage.

Kuhu and Mishti get ready for their wedding and look most beautiful in their Lehanga. Vishmabhar feeds Kheer to Mishti while Kuhu gets to eat her special diet Kheer.

The Baraat starts from Rajvansh house and Kunal and Abir sit on the horses to get their brides. Meenakshi is forced to see from afar.

Kuhu is still upset with Mishti getting married first and tells her she wants to get married first. Later, when Baraat reaches Maheshwari house, Abir goes missing from his horse.

Kuhu blames Mishti for spoiling her life and causing hindrance in her love life. Mishti tries to make her understand the problems she has faced in her life. However, Kuhu is not at all ready to give up and wants to get married first in Mishti’s Mandap.

Upcoming Yeh Rishtey Hai Pyaar Ke episode update: Mishti is adamant to get married to Abir on the same day.

© Copyright tellybest.com, 2018 & 2019. All Rights Reserved. Unauthorized use and/or duplication of this material without written permission from tellybest.com is strictly prohibited.
Cached Saved on: Tuesday 31st of March 2020 07:16:04 PMCached Disp on: Wednesday 1st of April 2020 12:27:54 PM