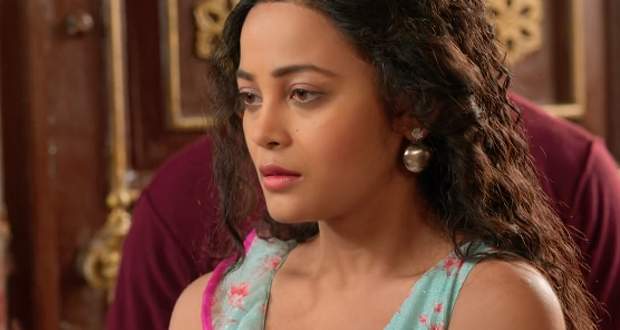 Today's YRHPK 19 Sep episode starts with Abir asking Nidhi to feed Kuhu the Laddoos. Meanwhile, Mishti adds a pillow in her dress to see what it looks like being pregnant.

She is heartbroken and starts crying while Abir witnesses the scene. He can see the pain in Mishti’s eyes while Mishti assures her that things will get better.

They overhear Nidhi shouting and learn that Kuhu is missing. Meanwhile, Kuhu falls down while climbing down from the balcony and leaves the house.

Abir and Mishti learn Kuhu escaped from the balcony and get worried for her. Meenakshi also learns the same and is disappointed in Kuhu. Meanwhile, Varsha is upset about Kuhu’s decision.

Vishambhar is shocked that Kuhu can take such a step and they at the same time they learn that Kuhu escaped through the balcony. Elsewhere, Kuhu and her friend reach the sets to meet SRK but he has already left.

The producer asks Kuhu if she is interested in modeling while Kuhu happily gives her an email address. Later, Kunal finds Kuhu and gets upset with her. They start arguing while Abir and Mishti arrive there.

Mishti asks Kuhu to not perform such stunts while Abir reveals Mishti used to do the same. Mishti promises Kuhu that they will go for an outing after the reports come in.

Mishti is worried about the report and eats icecream while Abir and Parul console her. Later, Meenakshi threatens to throw Kuhu and Kunal out of the house and rebukes her for her actions. She further asks her to pray that the pregnancy report is positive.