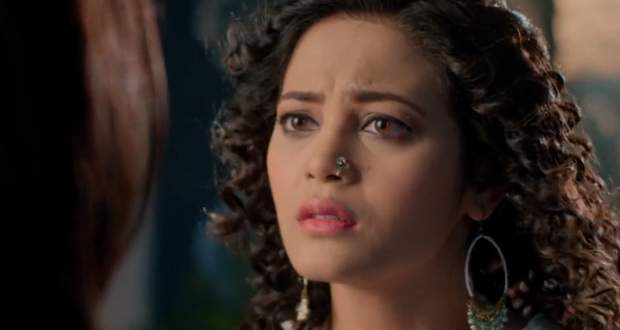 Today's YRHPK 1 Jul episode starts with Mishti and Abir being on a deserted road. They get a taxi and leave.

Maheshwaris get a call late at night. Vishambharnath attends the call while Jasmeet shows something to Rajshri which shocks her.

Over phone, Meenakshi starts bashing Maheshwari daughters. She states they change relations as much as they change clothes. She blames Kuhu of getting involved with Kunal.

Meanwhile, Abir and Mishti are discussing about Kunal and Kuhu. Mishti wants to leave everything on destiny. They share a romantic moment. Abir holds Mishti’s hand and states he will hold on to the chances thrown by fate.

Shaurya gives a suggestion of getting Kuhu and Saurav married. Vishambhar confronts about Kuhu meeting guys on her own.

Varsha claims she was promised by both girls they will not meet the Ranjvansh boys. Everybody is shocked to Varsha knew about Kunal and Kuhu.

Abir holds Mishti’s hand unaware about the presence of Kunal. Kunal is shocked and disappointed. Kuhu and Mishti argue about telling the truth or not.

Vishambharnath questions both girls about where they were. Kuhu tries to tell a lie but Mishti confesses everything. He gets furious to learn about Kuhu and Kunal’s friendship. He forbids her of having any relation with Kunal.

Kuhu is told to meet Saurav but she confesses her love for Kunal. Vishambhar is sticks to his decision regardless.

Kunal and Abir are still arguing over Shweta. Kunal starts to question Abir about Mishti when Meenakshi interrupts them. Kunal leaves without saying a word.

Kuhu blames Mishti for everything and states she will never get her true love.

© Copyright tellybest.com, 2018 & 2019. All Rights Reserved. Unauthorized use and/or duplication of this material without written permission from tellybest.com is strictly prohibited.
Cached Saved on: Saturday 6th of June 2020 07:51:20 PM