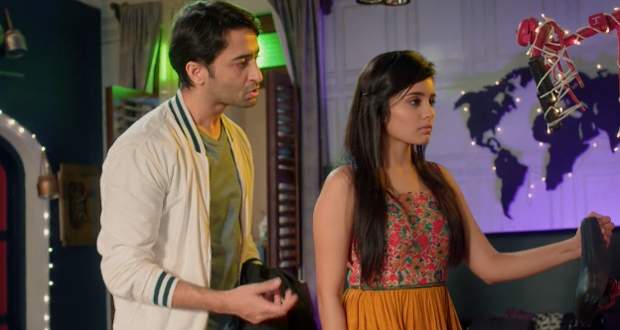 Today's YRHPK 20 Aug episode starts with Meenakshi asking Kuhu to stop and resolve the matter. She asks Mishti and Kunal if they knew about the wrong photograph being printed.

They both are not aware while Kuhu is upset about Mishti stealing the limelight each time. Kunal is not upset with Abir’s photograph getting printed as their brotherly love is more important.

Kuhu accuses Mishti of taking revenge from her as she accidentally spilled chocolate on her Jhanki. Mishti doesn’t stay quiet and is happy that Kuhu’s picture didn’t get printed.

Meenakshi asks Abir and Kunal to make things right before their meeting. Kunal tries to console Kuhu while she locks him in the bathroom. Elsewhere, Abir gets successful in getting a smile on Mishti’s face.

Kunal tries to explain to Kuhu that the limelight for the whole magazine is their interview. Kuhu is still upset and wants Mishti to apologize to her personally. Mishti agrees to talk to the magazine people for the family.

Meenakshi is upset with the fight in the house while Abir and Kunal try to console her. Abir disconnects Jasmeet’s phone as she might instigate Kuhu even more. Mishti calls at Maheshwari house and overhears Varsha and Rajshri fighting over their fight.

Mishti thinks Kuhu’s childish behavior creates trouble for both families. She thinks Kuhu cares about her own happiness while Kuhu also continues to blame her. They both expect an apology from each other.