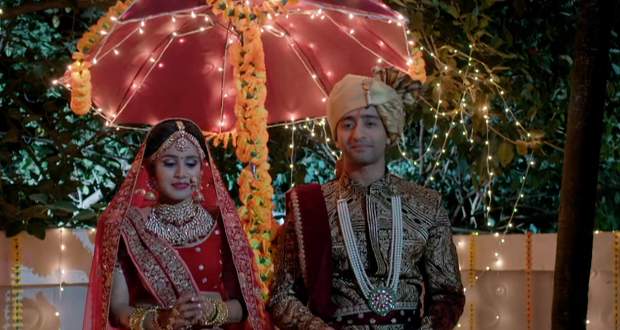 Today's YRHPK 20 Feb episode starts with everybody searching for Abir and trying to reach his phone. Kuhu comes out to reveal her demand while Vishambhar thinks she wants to know about Abir.

At the same time, Abir arrives with Meenakshi and reveals that Vishambhar helped him making the decision. Everybody gets happy to see her presence at the wedding.

Mishti gets worried about her marriage not happening in her Mandap. Meenakshi wishes to walk Mishti and Kuhu to the Mandap. Mishti refuses to go and says she will get married later.

She says as soon as Kuhu gets married she will also come. Meenakshi also praises Mishti’s move while later Mishti gets upset and starts crying.

Kuhu and Kunal’s marriage ritual start and Abir agrees with Mishti’s decision. Abir gets anxious and meets Mishti who takes him somewhere.

As soon as Kuhu’s marriage rituals finish Jugnu takes everyone outside the house. Mishti has arranged to get them married on top of the bus.

Everyone gets excited to see the idea and decoration while Kuhu gets upset as Mishti again stole all the limelight. The Pandit starts the rituals but there is not enough space for the pheras.