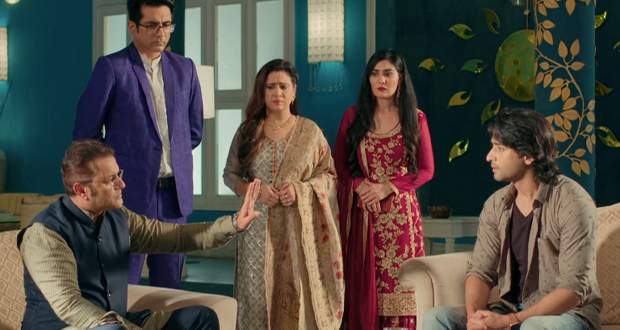 Today's YRHPK 20 Sep episode starts with Yashpal telling Abir that he will talk to Vishambhar. Jugnu informs Abir that Kunal is leaving for jogging.

Kaushal informs Yashpal and Meenakshi that Mehul has arrived in Rajkot. Meanwhile, Abir tries to console Kunal and wants his support.

Abir wants him to stay ready in one hour for a trip while he receives a call from Vishambhar who asks to meet him.

Meenakshi wishes to meet Mehul and is adamant to keep him away from her children. At the same time, Abir comes to meet Vishambhar in Maheshwari house.

Kunal is excited to go on a ride with Abir. Meanwhile, Vishambhar tries to give reasons why the relation won’t work while Abir gives reasons why Mishti is perfect for him.

Abir says Mishti has always done the right thing and have never cared about what people say. Vishambhar says he doesn’t care about people but just about Abir’s opinion.

He asks if Kunal rejects Mishti or if Kuhu’s happiness is sacrificed, then what he will do or say. Abir says he will give immense love to Mishti.

He further adds that if Kuhu and Kunal are meant to be, they don’t need the approval of any other relation.

Vishambhar warns Mishti that the path she has chosen will not be easy. He later agrees to give his support to their relation. Rajshri gives Mishti’s hand in Abir’s while Varsha gets upset with their decision.

Upcoming Yeh Rishtey Hai Pyaar Ke episode update: Abir and Mishti are delighted with Vishambhar supporting their relation while Abir gets a call from his father.

© Copyright tellybest.com, 2018 & 2019. All Rights Reserved. Unauthorized use and/or duplication of this material without written permission from tellybest.com is strictly prohibited.
Cached Saved on: Wednesday 5th of August 2020 11:18:00 AMCached Disp on: Thursday 6th of August 2020 03:24:41 PM