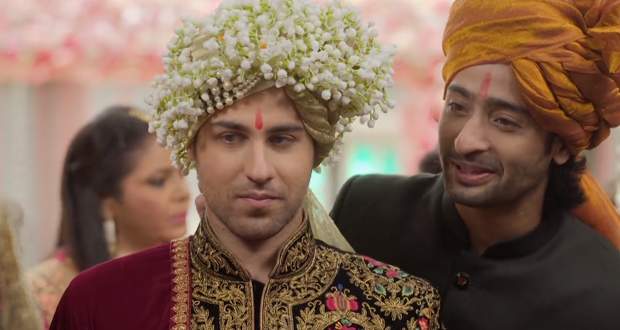 Today's YRHPK 21 Aug episode starts with Maheshwaris getting worried for the Baraat being late. Meanwhile, Meenakshi comes to meet Kunal and asks him to get married to Kuhu.

Kunal questions from her about the reason to get married and at the same time, Abir also arrives in Kunal’s room.

Abir gets mad at Kunal for leaving the marriage and hurting some girl’s feelings while Kunal again questions his mother about the turn of events.

Meanwhile, Atul is disguised as the groom and the Baraat reaches Maheshwari house. At the same time, Kunal is not able to say anything in front of Abir but is disappointed in his mother.

Abir says he will go far away from Kunal if he doesn’t come downstairs for the wedding. Kunal is helpless and decides to get married.

Mishti, on the other hand, keeps on imagining Abir at the airport. At the Maheshawari house, Abir arrives with Kunal and changes the groom in time.

Meenakshi is mad at Parul for blackmailing her. The rituals of the wedding start and Kuhu also arrives in the mandap.

Abir is searching for Mishti and wants to apologize.

Upcoming Yeh Rishtey Hai Pyaar Ke episode update: Vishambhar informs Abir that Mishti is at the airport and her flight will take off soon.

© Copyright tellybest.com, 2018 & 2019. All Rights Reserved. Unauthorized use and/or duplication of this material without written permission from tellybest.com is strictly prohibited.
Cached Saved on: Tuesday 14th of July 2020 02:19:28 PM