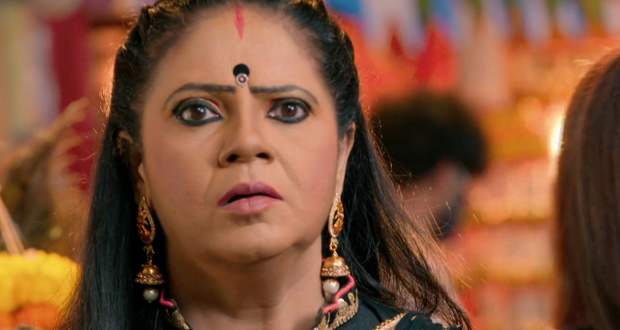 Today's YRHPK 21 Aug episode starts with Mishti getting upset with Abir protecting Kuhu. She is not ready to apologize to her each time while Abir is upset with her behavior.

Kuhu and Kunal also get in an argument while Kuhu throws Kunal out of the room. Kunal and Abir are fed up with their fight while in the morning Mishti and Kuhu find Abir and Kunal missing.

Mishti and Kuhu receive a message each from Abir and Kunal stating they are leaving the house as they are fed up with their fight. Meenakshi asks about Kunal as they have an important meeting.

Later, Meenakshi witnesses Abir and Kunal buying vegetables along with Rajshri. Meenakshi gets mad at Mishti and Kuhu and wishes to visit Maheshwari house.

Varsha hands over the Aarti to Vishambhar and the house bell rings at the same time. Abir asks him to welcome them while Vishambhar also welcomes them in the same way as a daughter-in-law is welcomed.

Meenakshi reaches Maheshwari house while Abir and Kunal are helping with the housework. Rajshri is scolding Jasmeet for spilling flour on Kunal when Meenakshi arrives.

She thinks Kunal is getting scolded and fumes in anger. She apologizes on behalf of her son’s behavior and points she has not got her son’s educated so that they can do household work.

Vishambhar taunts that he has also got Mishti and Kuhu educated. Meenakshi further question about Kunal and Abir helping Rajshri in the market while they reveal they can’t return home while Mishti and Kuhu are fighting.

Vishambhar apologizes for his daughter’s behavior while later Meenakshi asks Mishti and Kuhu to return when Abir and Kunal are with them. Rajshri and Varsha scold Kuhu and Mishti for their behavior and ask them to apologize to Meenakshi first.

Upcoming Yeh Rishtey Hai Pyaar Ke episode update: Meenakshi asks Vishmabhar to send Abir and Kunal or else she will throw Mishti and Kuhu out of the house.