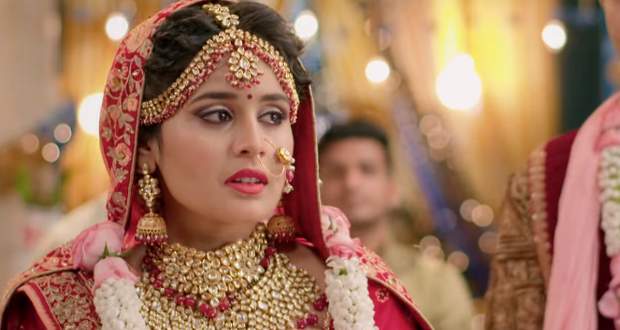 Today's YRHPK 21 Feb episode starts with the Pandit saying that they have to take Pheras on the bus. Abir recites an emotional poem and picks up Mishti in his arms to take the Pheras.

Their rituals get completed and everybody praises Mishti’s idea. Kuhu is jealous as Mishti has taken the whole limelight. Abir and Mishti take the blessings of Meenakshi.

Later, Kuhu and Kunal share some cute moments but are interrupted by Ketu. Jasmeet comes and tries to entice Kuhu against Mishti. She asks Kuhu to not let Meenakshi love Mishti.

She also entices her about not being like Parul and Kuhu realizes Kunal is Parul’s son. Mishti is asked to do the Bidai rituals in the Marvadi style.

Kuhu asks about her Bidaai but everyone says she is already a part of Rajvansh family. She leaves with Meenakshi to do the preparations for Mishti’s arrival in the house.

Mishti is about to drop the Diya because of Kuhu but Abir saves it. Mishti performs the rituals and shares an emotional goodbye with her family.

Abir also starts crying and Mishti tells Meenakshi that Abir is stealing her family. Meenakshi suggests doing the same and steals his family.

Mishti hugs everyone goodbye and Jasmeet asks Mishti to not break the Rajvansh family as she did with their family.