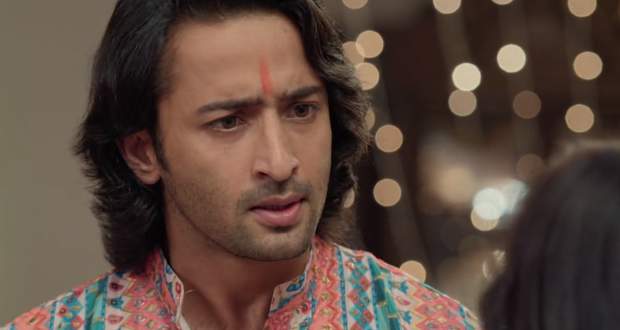 Today's YRHPK 21 Nov episode starts with Meenakshi and Parul arriving at Rajvansh house. Mishti takes blessings from them while Rajshri enquires if Parul is alright.

The rituals start when Abir arrives home. Abir remembers all the moments spent with Mishti and Kunal and is shattered with the fact that he has to choose one.

Abir declares that marriage will not happen while everyone gets shocked. Abir daydreams about Meenakshi throwing Kunal and Parul out of the house.

Mishti gives a permission letter to Meenakshi and says Abir will never leave without asking his mother. Meenakshi wishes to say something to Kunal while Abir interrupts and starts accusing Mishti.

He says Mishti kept the fact hidden about his father being a fraud. He accuses Mishti of dancing while everyone’s life was in danger.

Mishti reveals that Meenakshi told her to carry on with the engagement and smile for Abir. Mishti requests Abir to understand her point and is hurt with his allegations.

Abir says he wants to break the engagement with her. Vishambhar gets angry at Abir and asks Mishti to not cry for the guy who doesn’t trust her.

Abir tears their wedding card while Vishambhar takes Mishti out of Rajvansh house.

Upcoming Yeh Rishtey Hai Pyaar Ke episode update: Mishti doesn’t give up on their relationship and asks him to say looking in her eyes that he doesn’t love her.