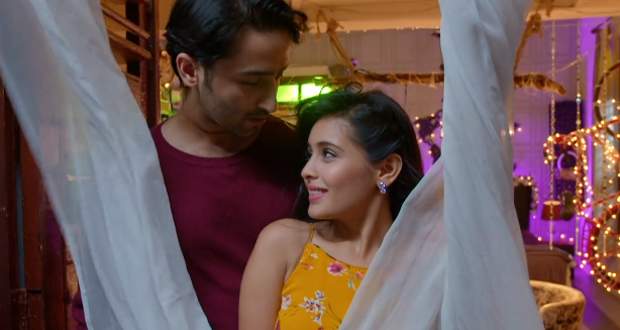 Today's YRHPK 21 Sep episode starts with Mishti making food for the family to get distracted from the tension. Abir comes there and starts acting just like Mishti to make her smile.

Meanwhile, Kunal is upset with Kuhu while she apologizes to him. Further, Kunal makes Kuhu smile by clicking her pictures. Elsewhere, Varsha is still mad at Kuhu and plans to throw all her stuff.

Varsha is upset that she will never get her grandchild as Meenakshi might want a boy later if Kuhu gives birth to a girl. Vishambhar assures her nothing of that sort will happen while Varsha doesn’t believe him.

Kuhu’s report comes in and Meenakshi asks Nidhi to open it. Abir takes the report and keeps in front of god. He states in front of everyone that the report holds a decision and everyone needs to abide by it.

Meenakshi gives his bangles to Mishti but Mishti thinks they should belong to Kuhu. The family celebrates while later Mishti decides to not get sad or upset with her life.

Mishti and Abir share some romantic moments while Abir is upset with Kuhu’s careless behavior. Later, Kuhu learns that she can get a year modeling contract but the contract holds a no pregnancy clause.

Kuhu wonders if she should steal the opportunity of becoming rich and famous. Kunal is proud of Kuhu but can’t allow her to sign the contract.