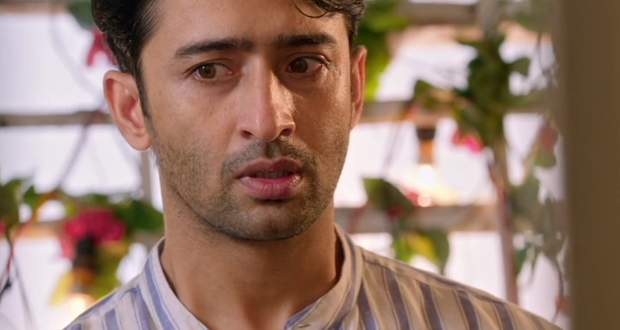 Today's YRHPK 22 Jul episode starts with Varun offering to give his brother’s medicine to Mishti. Abir hurts himself to distract Mishti from looking at Varun and his brother’s photo.

Ketki disconnects the call while Kuhu gets suspicious of the voice. Abir and Mishti wish to leave and ask Ketki to stay with Varun and return home later.

Jugnu gets worried about the CCTV footage while Nidhi calls everyone to reveal Jugnu was doing something on Abir’s laptop. Nidhi asks Kuhu to use the laptop while Kuhu finds a folder with Mishti’s name.

Nidhi does something on the laptop and the screen displays bridal Lehangas. Meanwhile, Abir takes Mishti to the NGO and tries to tell her the truth.

Abir asks Mishti to not think about finding her attacker’s family. Mishti is adamant to meet the family as she needs to get over the incident. Abir tries to console her that she is not ready to meet the boy’s family.

Varun’s mother calls Meenakshi and says they need to perform the wedding in two weeks as Varun has to go to America for some work. The family decides to prepare for the wedding.

Meenakshi asks Abir if he will stay for the wedding while Mishti congratulates and leaves. Nidhi creates a scene about Mishti and Abir’s behavior towards their happiness.

Kaushal asks Abir if Varun is the right guy for Ketki while Abir says he is perfect. Later, Mishti finds Kuhu in her room and gets mad at her. Kuhu argues with her while Mishti asks Kuhu to leave her room.

Ketki asks the family that if they can organize a Pooja for Varun’s brother while Abir shouts no in response.

© Copyright tellybest.com, 2018, 2019, 2020. All Rights Reserved. Unauthorized use and/or duplication of this material without written permission from tellybest.com is strictly prohibited.
Cached Saved on: Thursday 22nd of October 2020 03:04:41 PM