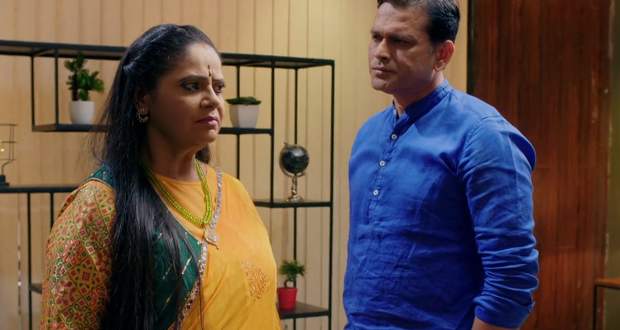 Today's YRHPK 22 Oct episode starts with Mishti remembering all the things said and done in the past days. Later, she sees Kunal in the park while on the other hand, Meenakshi is upset with Abir’s decision.

Parul wants to tell Kunal the truth while Meenakshi doesn’t want her to reveal anything and asks Mehul on phone to meet him in her office.

Mishti blames Kunal for destroying his family and blackmailing his own loved ones. Kunal wants Mishti to leave Abir while Mishti knows Abir can’t live without her.

Mehul is with Abir who is choosing nameplates for their new home. Later, Mishti comes to help Abir in shopping and reminds her of every family member in his house.

Abir apologizes to Mishti for taking the decision without her concern. She says she doesn’t want to live away from family and wants time to find a better way.

Kuhu does a drama of talking to Kunal in front of Varsha. Varsha doesn’t want her to interfere in Abir and Mishti’s matter and think about her life.

Rajshri wants Mishti to talk to Meenakshi and find a solution. Meanwhile, Meenakshi asks her employee to not let Kunal come to the office.

Mehul arrives at Meenakshi’s office and asks for money and status from her. He says in exchange for Abir, Meenakshi can give all of her property to him.

Mishti arrives at Meenakshi’s office and sees Mehul talking to Meenakshi. She wonders what mistake Mehul is talking about of Meenakshi.