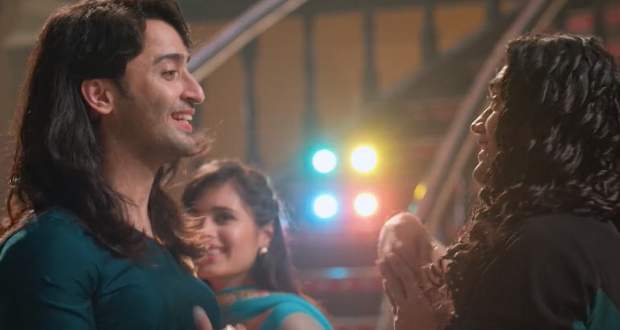 Today's YRHPK 22 Sep episode starts with Abir talking to Mishti as Kanha Ji. He continues to praise himself while Mishti catches him in her camera.

Meenakshi asks Kaushal to get forms for FD transfer while Nidhi wants to know the details. Later, Abir and Mishti prepare a special breakfast for Kuhu and share some emotional talk.

Meenakshi witnesses it and later offers Prasad to Abir. Abir refuses to take from her hand and takes it from Mishti’s hand instead. Further, Meenakshi cover-ups the FD transfer thing and scolds Kaushal.

Mishti video calls Rajshri to ask if the smoothie made by her is safe for the baby. Rajshri offers to help her whenever and also compliments her for having the most special glow of a mother.

Rajshri asks Varsha to accept the truth while Varsha still opposes Kuhu’s decision. Later, Mishti and Abir find Kuhu in a lost state while Abir and Kunal decide to cheer her up.

Kuhu thinks she shouldn’t think about modeling contest as everyone is happy. She shares with Jasmeet that she is getting a lot of importance. Jasmeet warns her of getting neglected after the baby gets born.

Kunal tells everyone about the party while Kuhu is asked not to attend the party. She gets upset and goes to her room while Meenakshi wants Mishti and Abir to go to the party.

Upcoming Yeh Rishtey Hai Pyaar Ke episode update: Kuhu gets jealous of Mishti getting all the attention in the family.