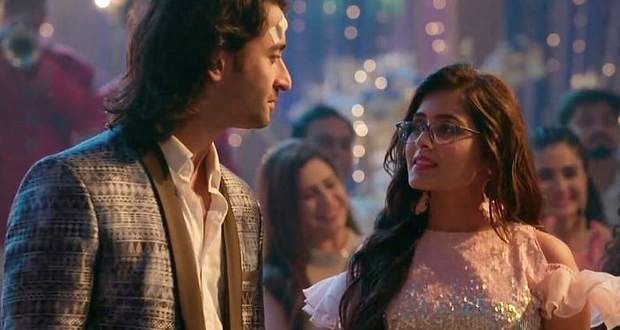 Today's YRHPK 23 Jul episode starts with Abir giving the bracelet to Mishti and apologizing. She is still mad at him and decides to never take his help again.

Abir says to Mishty to understand the love and respect Vishambhar has for her. He asks her about her feelings again.

Meanwhile, everybody is performing the rituals of Kuhu and Kunal’s engagement. Kunal wonders where Abir is.

Meenakshi says she will get Mishti downstairs.

Mishti and Abir continue their discussion. Abir wants Mishti to wear his gift while Mishti challenges him if he successfully makes her wear the bracelet, she will answer his questions.

Mishti sends Abir away before Meenakshi arrives. Rituals for the engagement start at the Maheshwari house while Abir and Mishti continue to communicate through their eyes.

At the same time, Kunal receives a text and goes out.

Abir gets upset with Mishti for mocking him and later returns to tie the bracelet in her hand. They share cute moments together.

They both see Kunal and Shweta hugging from the window. Kuhu also sees this. Kunal starts shouting at Shweta and tells her to stay away.

Shweta starts mocking Kuhu but she gives her a bracelet instead and warns her before leaving.

Shweta continues to cling to Kunal and kisses him before leaving. Mishti comes and wants to handle things.

Later, it is revealed that Meenakshi is behind Shweta’s arrival at Maheshwari house.

© Copyright tellybest.com, 2018 & 2019. All Rights Reserved. Unauthorized use and/or duplication of this material without written permission from tellybest.com is strictly prohibited.
Cached Saved on: Friday 31st of January 2020 09:21:20 AMCached Disp on: Tuesday 18th of February 2020 12:23:09 PM