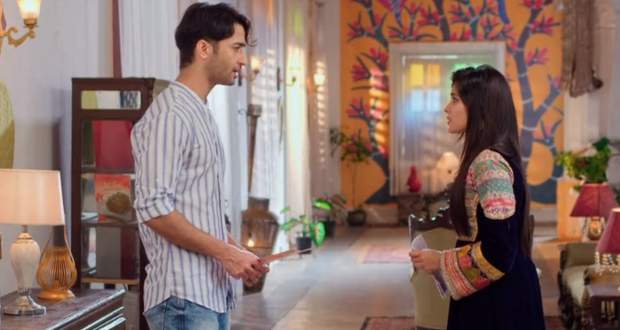 Today's YRHPK 23 Jul episode starts with Ketki suggesting they should organize a Pooja for Varun’s brother. Abir objects the suggestion while Nidhi supports it.

Abir says they should not organize a Pooja at the time of marriage. Everyone agrees with Abir while Parul again asks him about his worried state. He gets the letter from Parul and again lies to her.

Nidhi taunts Meenakshi by adding Abir’s name in the guest list. Meenakshi decides to talk to Mishti about the wedding. Meanwhile, Abir reads the letter and is shocked that someone might expose Mishti’s secret.

The letter slips from Abir’s hand and lands in front of Mishti. Mishti picks up the letter but Abir distracts her. Mishti apologizes to Abir and is thankful for his patience with him.

Abir lies to Mishti that her attacker’s family lives in the US. He asks her to write a letter to them and not mention her name. Abir makes up a poem to hide what’s written in the letter.

Mishti writes the letter with a heavy heart while Parul tells a beautiful story about Lord Krishna. Abir listens to the story and feels he is doing the right thing.

Meenakshi talks to Mishti and asks her to solve her problem before Ketki’s marriage. Mishti assures her that nothing will go wrong and asks for one more chance.

Meenakshi wants to send wedding cards while Mishti offers to help. Mishti makes food for everyone while Meenakshi sees the letter written by Mishti.

© Copyright tellybest.com, 2018, 2019, 2020. All Rights Reserved. Unauthorized use and/or duplication of this material without written permission from tellybest.com is strictly prohibited.
Cached Saved on: Sunday 1st of November 2020 03:13:52 AM