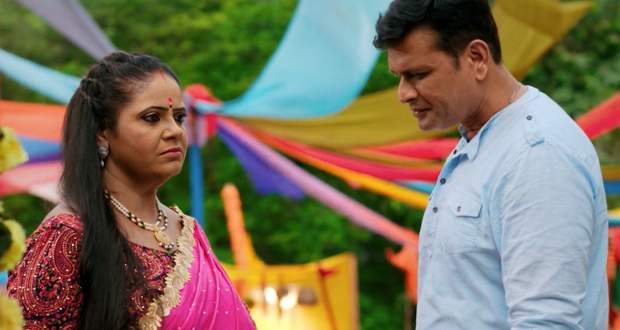 Today's YRHPK 23 Sep episode starts with Rajshri leaving Mishti outside to talk to Abir. They both share their happiness by hugging each other. Abir keeps on receiving a phone call from an unknown number.

He further says they will try to strengthen Kuhu and Kunal’s relation. Meanwhile, Meenakshi decides to meet Mehul alone and asks Kaushal to not tell anyone about him.

Abir and Mishti are delighted with Vishambhar accepting their relation. Abir’s phone continues to ring and at last, Abir picks the call.

The call turns out to be his father’s who wishes to get his son back. Meanwhile, Meenakshi comes to meet Mehul in a temple.

Meenakshi warns Mehul to leave their lives while Mehul says he is innocent. She threatens to ruin his life while Mehul thinks his life is already ruined.

Mehul tells Meenakshi that he will meet his sons in any condition while she breaks his phone. At the same time, Kunal gets angry while waiting for Abir.

Mishti sees Meenakshi’s location on Abir’s phone and wonders what she is doing in Ganesh Mandir. Meenakshi gets a restraining order for Mehul to stay away from her family.

Abir and Mishti reach the temple to meet his father.