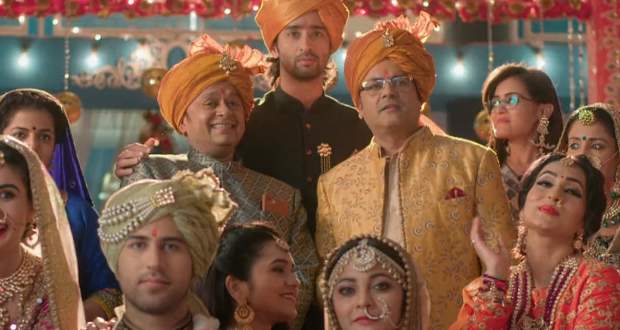 Today's YRHPK 24 Aug episode starts with Abir telling Mishti that he can never hurt her. Mishti can’t believe that she can be this lucky to have Abir in her life.

Meanwhile, Nidhi creates a scene after the fire in Kuhu and Kunal’s Gathbandhan. However, Panditji says the 7 rounds around the holy fire were already done.

Abir and Mishti discuss Meenakshi’s intentions and hatred for Mishti. Abir wants Mishti to return home and face her family.

Mishti struggles to go inside Maheshwari house while Abir motivates her to make everything right with her family. At the same time, Kunal feels forced to marry a girl he doesn’t love.

Everybody start celebrating Kuhu’s wedding while Rajshri misses Mishti. She gets delighted to see Mishti coming down the stairs while Kuhu gets shocked.

Mishti apologizes to Kuhu and they both share a hug. Kunal is clearly not happy with Mishti’s arrival and leaves for some fresh air.

Later, Kunal tells Meenakshi that she has lost against Mishti. Meanwhile, Mishti feels guilty while Nidhi accidentally drops a bomb by saying if Kunal has again escaped.

Rajshri goes outside and requests Kunal to forget everything and return for Kuhu. At the same time, Ketki tries to cover up her mother’s revelation.

Mishti and Abir fight for Kunal’s shoes while Kunal and Meenakshi are unhappy with their closeness. Kunal shouts in front of everyone while Kuhu apologizes for Mishti’s arrival. Abir is not happy with Kunal’s behaviour.

Meenakshi gets upset about both of her sons being angry with her. Later, Kuhu’s emotional Vidaai brings tears in everyone’s eyes. Kunal whispers in Mishti’s ears that she should save the money given for the time when Kuhu will return after a failed marriage.