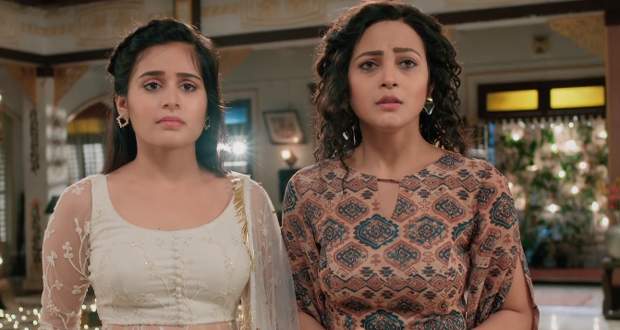 Today's YRHPK 24 Aug episode starts with Mishti asking Abir to return home on a video call. Abir wants her to sort things out with Kuhu while Mishti knows she has to make things right again.

Abir hangs up the call while Mishti wishes to patch things up with Kuhu. Meanwhile, Meenakshi wishes to sort things between Mishti and Kuhu using her way. Abir asks her to leave the matter to them.

Later, Kuhu and Mishti act of being sweet to each other while Meenakshi is suspicious of their drama. She threatens them and asks them to bring her sons back.

Mishti and Kuhu decide to put their fight on hold for their family. Kuhu and Mishti arrive at Maheshwari house with the dollhouse and recite a poem.

They apologize to everyone while Abir is still suspicious they are acting. Abir and Kuhu make juice while Mishti helps Kunal in packing. Abir tries to get the truth out of Kuhu while Kunal wants to know if they are acting.

Mishti asks Rajshri if she is ready to become a mother while Rajshri explains her the meaning of motherhood. Meanwhile, Abir starts talking about the dollhouse while Kuhu gets furious at Mishti and leaves the kitchen.

Kunal tells Meenakshi that they are returning home while Kuhu starts shouting at Mishti. She says Mishti has told the dollhouse story to Abir while Rajshri reveals she told the story.

Their drama is revealed in front of everyone while Abir and Kunal get upset with them. Vishmabhar is shattered with their behavior and asks them to leave the house. Later, Mishti and Abir get in an argument over Mishti and Kuhu’s fight.

Abir doesn’t want their fight to affect the behavior of their children.

© Copyright tellybest.com, 2018 & 2019 & 2020. All Rights Reserved. Unauthorized use and/or duplication of this material without written permission from tellybest.com is strictly prohibited.
Cached Saved on: Thursday 24th of September 2020 04:23:37 AM