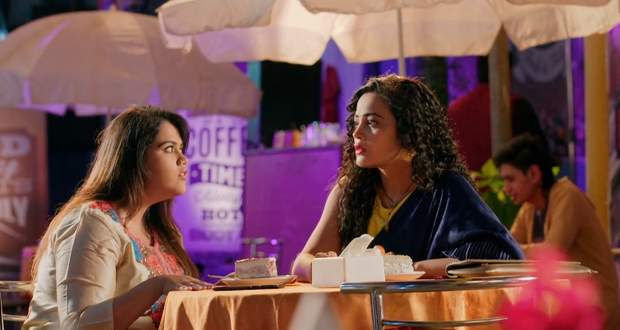 Today's YRHPK 24 Sep episode starts with Abir and Mishti searching for Meenakshi in the temple. Meenakshi orders Laxman to catch Mehul and some goons kidnap him.

Abir gets upset to not find his father and wants to ask Meenakshi about him. Meanwhile, Parul comes to meet Meenakshi and offers support.

She asks for one chance and Meenakshi gives one last chance to her. Abir comes home and enquires about Meenakshi while Mishti asks Rajshri not to call in Rajvansh house.

Abir asks Yashpal about his father and wonders why his father left him. Meanwhile, Mishti is worried about Abir and Rajshri wants Mishti to be near him.

Yashpal tells Abir about his father doing fraud in his company. At the same time, Kuhu meets her sister Ananya and enquires about married relations.

Ananya wonders if Kuhu and Kunal are doing well in their marriage. Later, Yashpal consoles Abir and says he will not stop him in finding his father.

Mishti tries to cheer Abir up over phone while the goons take Mehul in a van. They decide to meet somewhere while Meenakshi tells Yashpal that Mehul is taken care of.

Abir hears their conversation and gets angry. Meanwhile, Kuhu is suspicious about Kunal cheating on her and decides to ask him. She sees some girl meeting Kunal and takes divorce papers from her hand.

© Copyright tellybest.com, 2018 & 2019. All Rights Reserved. Unauthorized use and/or duplication of this material without written permission from tellybest.com is strictly prohibited.
Cached Saved on: Monday 10th of August 2020 01:42:28 PM