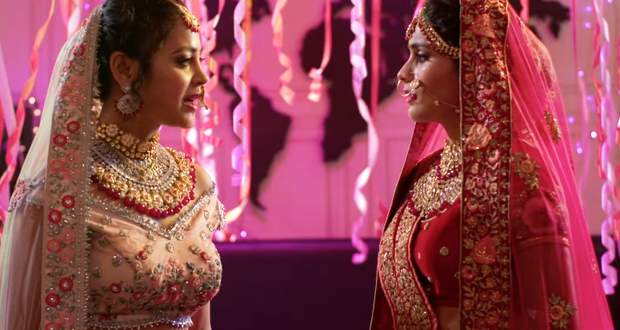 Today's YRHPK 25 Feb episode starts with Mishti finding a spectacle in the bowl of milk. She further finds the earring which she was wearing when she first met Abir.

Meenakshi is happy with her victory while Abir and Mishti find a ring each. Meenakshi says she will give the coins to Kuhu but Kuhu refuses to take them.

Kunal asks for Abir’s help before the first night while Kuhu brings Mishti to her decorated room. Mishti wants to reconcile her differences with Kuhu.

She says they should patch things up just for their husbands. Kuhu agrees to be friends with Mishti and is confused about her role on the first night.

Jasmeet gets upset and Meenakshi gets successful in her plan. She wishes to use Jasmeet and show his sons that Kuhu and Mishti are not right for the family.

She further wishes to plot against them both. Later, Mishti gets ready and waits for Abir while Abir is nervous. Meanwhile, Kuhu enters the room and gets happy with decoration.

Kuhu and Kunal share some cute moments together. Elsewhere, Abir finds Mishti sleeping in the bed and makes her sleep on his lap.

In the morning, Kuhu receives a call from Jasmeet who tries to compare her with Parul. Later, Rajshri calls Mishti and scolds her for sleeping till late.

Upcoming Yeh Rishtey Hai Pyaar Ke episode update: Meenakshi wishes to give Mishti a necklace for her first made meal while Mishti struggles to make food.