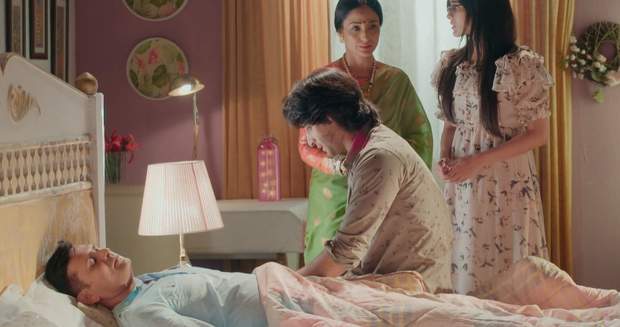 Today's YRHPK 25 Sep episode starts with Meenakshi instructing Laxman to take Mehul out of the city as soon as possible. Mehul gets out of the ropes and hits the men inside.

Mishti’s bike gets hit by the same van while Meenakshi tries to console Abir. Mishti sees Mehul fighting the goons and decides to help.

The goons run away and leave Mehul behind. Mehul is beaten up badly and gets unconscious. Abir arrives and proposes to take him to Maheshwari house.

Abir is disappointed in his mother and Naanu while Mishti supports his decision. Meanwhile, Kuhu creates a scene and calls Kunal a cheater.

Kunal reveals he doesn’t love her or need her in his life. At the same time, Yashpal falls on the stairs and feels sick.

Abir and Mishti bring Mehul at Maheshwari house and wonder who did this to him. Meanwhile, Naanu wishes to meet Abir and refuses to take the medicine.

Kaushal reveals in front of Kunal that Abir has gone to search for his father. Kunal and Abir both ask Meenakshi about their father.

Abir threatens to complain in police about his father. Meenakshi again lies that his father is in Mumbai and sends an address. Later, Abir decides to leave for Mumbai to search for his father. Kunal tries to stop him but Abir is adamant to go for his father.

© Copyright tellybest.com, 2018 & 2019. All Rights Reserved. Unauthorized use and/or duplication of this material without written permission from tellybest.com is strictly prohibited.
Cached Saved on: Monday 10th of August 2020 01:48:56 PM