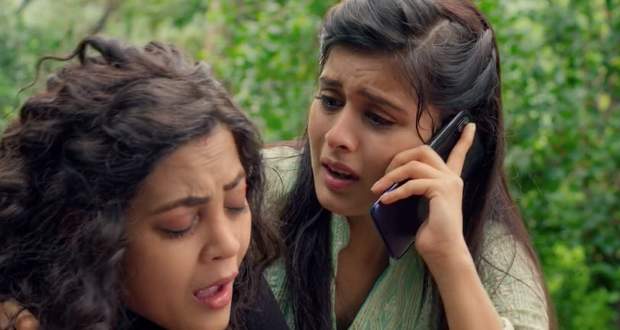 Today's YRHPK 26 Aug episode starts with Abir and Mishti making a promise to each other. Kuhu receives the sample cover photograph on the magazine and gets excited.

Mishti tells her that the next issue will have their picture and reveals she should have done it earlier. Mishti wants to convince and bring Abir and Kunal back but asks her to take her own decision.

Abir asks Meenakshi about her ultimatum for Kuhu and Mishti while they argue over their ways of dealing with the situation. Meenakshi is upset with people talking behind their backs while Abir asks her to not come in the husband-wife matter.

Mishti and Kuhu are walking on the road waiting for a taxi when Kuhu falls down and a log of wood falls on her leg. She is not able to get up and screams in pain.

Mishti tries to help her and calls Abir. Abir and Kunal don’t believe them and think they are acting. Mishti doesn’t give up and despite the pain in her stomach, she manages to get Kuhu to the nearest clinic.

Kuhu is in pain while Mishti tries to distract her so that doctor can apply an ointment and do bandage. Kuhu is scared of the fracture while Mishti consoles her. Kuhu has not suffered a fracture while Abir and Kunal are pleased to see them together.

Mishti and Abir apologize to each other while Mishti gets pain in her stomach.