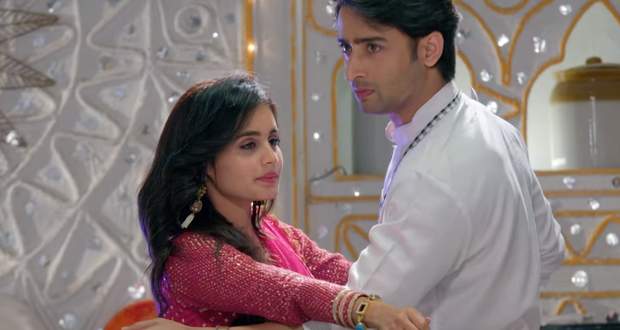 Today's YRHPK 26 Feb episode starts with Abir and Kunal doing yoga outside. Kunal tells Abir about his fight with Kuhu while Abir thinks he is revealing some intimate details.

Mishti apologizes to Abir for sleeping early while Abir acts of being angry. Mishti gets seriously upset while Abir asks her to calm down. He makes Mishti understand that it is not an examination and is life.

Later, Kunal apologizes to Kuhu and Meenakshi reveals that she is giving a necklace to Mishti for her first Rasoi. Kuhu reveals that Mishti doesn’t know how to cook.

Mishti wishes to try while Abir decides to support her. Abir wishes to organize a cooking face-off between him and Mishti. They start cooking and everybody enjoys their competition.

Meenakshi sends Kuhu to get the necklace while Mishti and Abir romance in the kitchen. Later, Kuhu takes the necklace and tries to wear it but Meenakshi arrives.

Meenakshi reveals that she has to give the necklace to Mishti to make her happy. She asks her to try it on if she wants to and later brings it downstairs.

Meenakshi gets successful in her plan as Kuhu gets jealous of Mishti. Meanwhile, Mishti tries to distract Abir to win the competition while Maheshwaris arrive as judges.

Everyone comes inside the kitchen and say something is burning. Mishti’s cake is all burnt and Vishambhar asks her to do something.

Meenakshi shows everyone the necklace and asks Kuhu to give it to Mishti. She further knows what Kuhu has done with the necklace.

Upcoming Yeh Rishtey Hai Pyaar Ke episode update: Kuhu picks up the necklace but it is broken while Mishti gets upset with Kuhu.

© Copyright tellybest.com, 2018 & 2019. All Rights Reserved. Unauthorized use and/or duplication of this material without written permission from tellybest.com is strictly prohibited.
Cached Saved on: Thursday 9th of April 2020 10:03:39 AMCached Disp on: Saturday 11th of April 2020 12:38:44 AM