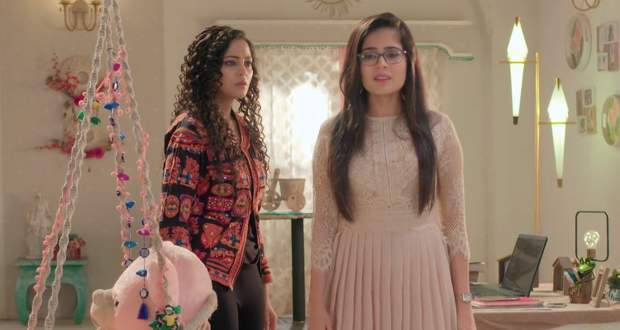 Today's YRHPK 26 Jul episode starts with Kuhu getting a call from some girl inquiring about her fiancé hugging his ex. She further says she can find out the real sender of the email using timestamp.

Kuhu gets worried and tries to change it. She calls Kunal but Meenakshi picks up instead.

Mishti hears her saying something about timestamp and confronts her. She asks her why she did it but Kuhu cross-questions her about choosing Abir of all guys.

Meenakshi and Kunal listen to their conversation through Kuhu’s phone.

Kuhu tells her she doesn’t want her to come in Ranjvansh house as she is excess baggage she wants to get rid of.

She tells her to not get involved in her life while Mishti challenges she will do anything to get Abir.

She says she will tell Abir about her feelings. Jasmeet comes and informs about Kunal’s arrival. Mishti gets upset with Kuhu’s actions.

Meanwhile, Abir enquires from Yashpal about Parul being upset. He also says Mishti is innocent and that Meenakshi is doing it to break the marriage.

Later, Kunal comes to apologize to Mishti for misunderstanding her. He asks to take Kuhu for a spa appointment.

At Maheshwari house, everyone starts preparing for the sangeet function. Mishti calls Abir to tell him about her feelings but Abir is not able to understand.

© Copyright tellybest.com, 2018 & 2019. All Rights Reserved. Unauthorized use and/or duplication of this material without written permission from tellybest.com is strictly prohibited.
Cached Saved on: Friday 31st of January 2020 06:40:07 AMCached Disp on: Wednesday 19th of February 2020 01:35:24 AM