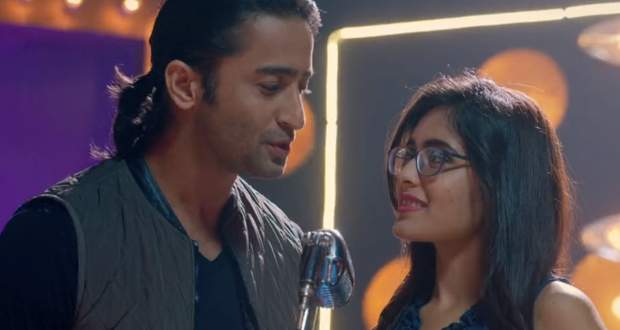 Today's YRHPK 26 Jun episode starts with Meenakshi Rajvansh speaking with Shweta on phone and saying she is not doing her job properly.

She further adds that Kunal is going to meet Kuhu.

Meenakshi tells Parul that Kunal is fine and is with Abir.

Parul enquires about the phone call but Meenakshi says she doesn’t need to worry about it.

Mishti and Kuhu ensure their sir the performance will be good.

Mishti tells Kuhu Kunal is about to come and Kuhu is out of their in no time.

Kunal says to Kuhu he wouldn’t have come if he knew Abir was taking Mishti’s help.

Kuhu tells Kabir she is going to perform.

Meanwhile, Mishti asks Abir if her dress is looking fine.

Abir zips her dress up and both have a romantic moment.

Mishti tells Abir that she can also sing.

Mishti starts singing on stage and Abir joins him. Kuhu gets upset.

Shaurya and Varsha come to see the performance but at the same time there is a power cut. They decide to go to a small restaurant instead.

Kunal and Kuhu come out just after they leave.

Kunal goes to search for Abir but gets distracted by a call from Shweta.

Kuhu tells Mishti and Abir that Kunal left because of an emergency.

Shweta starts doing drama in front of Kunal to forgive her.

Abir comes and tells Kunal that he shouldn’t be with Shweta.

Shweta admits she was doing drama because she loves Kunal.

Kunal leaves with Kuhu instead.

Mishti says to Abir that they should tell the truth about Shweta to Kuhu.

Shweta tells Meenakshi on phone that she has a plan.

Meenakshi tells Shweta that everything is a drama and Parul listen everything.