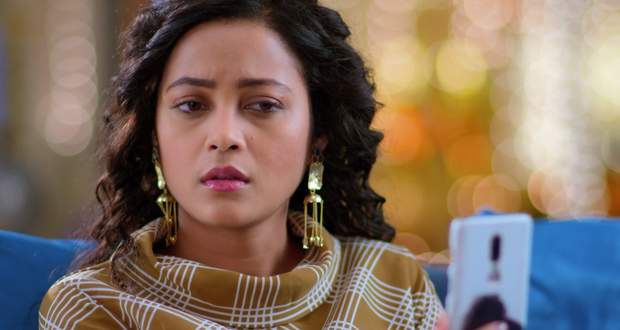 Today's YRHPK 26 Sep episode starts with Mishti blaming herself for Kuhu’s condition. Abir consoles her and takes her to meet Rajshri. Later, Kuhu wishes to eat nuts and creates an issue about Mishti going to Maheshwari house.

Mishti and Abir visit Maheshwari house while Rajshri misses Varsha’s presence in her cake cutting. Jasmeet starts taunting and thinks Kuhu is treated as a 2nd option while Varsha overhears this.

Kuhu talks to her friend about the baby shower and her friend thinks the Rajvansh family will organize Godbharai for Mishti. Elsewhere, Rajshri and Vishambhar wish to do Godbharai of Mishti.

Kuhu creates a scene in front of Kunal that she didn’t get her milkshake. Mishti arrives and reveals she made the milkshake in the morning. Mishti reveals about Godbharai while Kuhu wants a baby shower.

Abir and Mishti suggest doing both but Kuhu is not ready for Godbharai. She continues to blame Mishti and further Kunal also blames Mishti for giving tension to Kuhu.

Mishti talks about hormones going out of control during pregnancy and explains Kuhu’s behavior. Abir agrees but still thinks Kuhu is doing a favor for them.

Mishti makes Abir smile and they talk about baby names. Elsewhere, Meenakshi has called the lawyer urgently as she can’t trust Kuhu. Later, the baby kicks, and Kunal calls everyone.

However, the baby doesn’t kick when Mishti touches Kuhu’s belly. Kuhu says the baby likes her better than Mishti and she will take it away if Mishti scolds the baby.