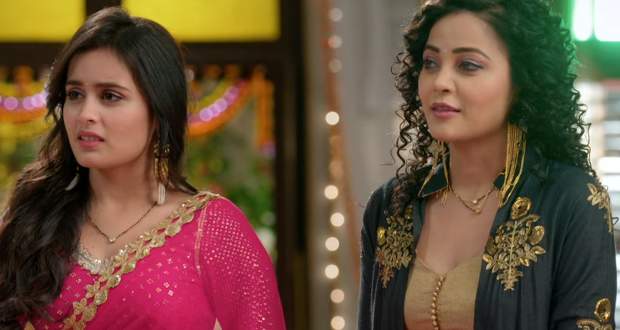 Everyone likes Abir’s Kheer while Mishti reveals that she has made brownie cake. Maheshwari remembers an old story when Mishti came to their house and they forgot Kuhu’s birthday.

Mishti had made the same brownie for Kuhu in their childhood. Kuhu tastes Mishti’s cake and calls it perfect. Later, Meenakshi asks Kuhu to give the necklace to Mishti.

Everyone asks Kuhu to make Mishti wear the necklace while she knows she accidentally broke the necklace in anger. She makes excuses but the family insists.

Kuhu asks Parul to make her wear the necklace but everyone wants Kuhu to do it. She picks up the necklace and it is broken. Meenakshi wants Mishti to think that it is done by Kuhu.

Mishti confronts Kuhu and is upset that she spoiled her first Rasoi Rasam. She blames her of being jealous while Kuhu says she hasn’t done anything on purpose.

Rajshri comes and they enact of having a loving conversation. Later, Abir wants Mishti to do the Pooja of Mahashivratri instead of him. Mishti refuses to take Kuhu’s help as she is afraid something might go wrong.

Parul reveals the story of Abir hiding the necklace for his future wife in his childhood. Mishti continues to get upset with Kuhu while later Kunal confronts Kuhu about her sad state.