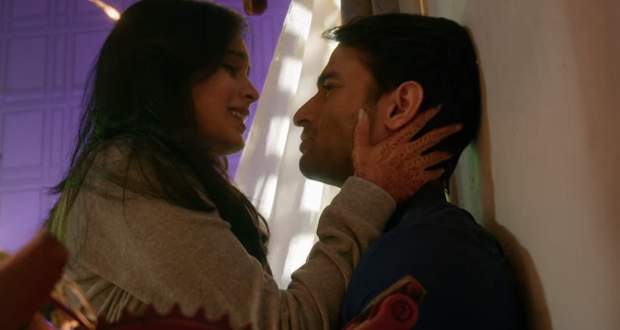 Today's YRHPK 27 Jan episode starts with Kunal getting proud of his acting. Abir reveals that Mishti needs some more time. Later, Mishti comes to meet Abir in his room.

Meanwhile, Nishant is there to meet Meenakshi and reveals that Abir and Mishti are about to reunite. Elsewhere, Mishti accuses Abir of getting late in confessing his love.

She also shows him the mirror locket and says it is too late. Nishant, on the other hand, wants Meenakshi to help him separate Abir and Mishti.

Meenakshi asks him to meet her in the morning and says Mishti will herself leave Abir. She also asks him to leave for London as early as he can after marriage.

Abir and Mishti share some emotional moments as Abir apologizes for his mistakes. However, Mishti wishes to go as it is her wedding the next day.

Abir doesn’t tell Mishti that Nishant knew everything and asks Mishti to go back home. He promises that he will talk to Vishambhar before her Haldi ceremony.

Mishti gets ready for the Haldi next day while Abir also leaves his home. Nishant is present outside Rajvansh house waiting for Meenakshi.

Later, Abir arrives at Maheshwari house and says he broke the relations for his family. He furthers says that three lives will get spoiled if Mishti married Nishant.

Jasmeet doesn’t let Kunal speak but Vishambhar gives two minutes to Abir. At the same time, Nishant arrives in a drunken state and stops him.

© Copyright tellybest.com, 2018 & 2019. All Rights Reserved. Unauthorized use and/or duplication of this material without written permission from tellybest.com is strictly prohibited.
Cached Saved on: Tuesday 31st of March 2020 07:03:26 AM