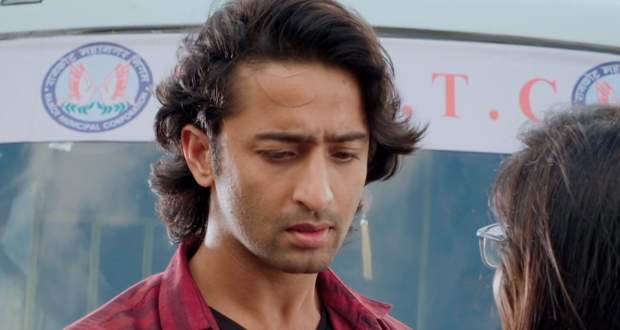 Today's YRHPK 27 Sep episode starts with Abir calming down the people going to Mumbai with him. He asks everyone to help him in changing the tire of the bus.

Mishti starts searching for Abir’s father while Mehul reaches Ranjvansh house to meet his son. Meenakshi wants Abir to leave for Mumbai and asks Laxman to help with it.

Mehul listens to it and decides to reach the place where Abir is. Meanwhile, Mishti doesn’t get any help from the police.

Meenakshi finds Mehul’s ring and deduces he is around her house. At the same time, Mishti decides to reach Abir’s location.

Mehul gets a lift to Abir’s location while Mishti messages Abir but it doesn’t get delivered. Later, Abir listens to a man talking about him and deduces he is sent by Meenakshi.

Mishti is finally able to reach Abir and tells him the truth about his father. Abir gets delighted but it all turns out to be a dream of Mishti.

Mishti wakes up and tries to stop the bus but fails. Meanwhile, Abir reaches home and is welcomed with a surprise birthday party. Later, Mishti finds Mehul in the middle of the road. At the same time, Abir is disappointed in his family and wants to leave the house.

Abir is also upset that his Naanu lied to him.

© Copyright tellybest.com, 2018 & 2019. All Rights Reserved. Unauthorized use and/or duplication of this material without written permission from tellybest.com is strictly prohibited.
Cached Saved on: Monday 10th of August 2020 01:27:43 PM