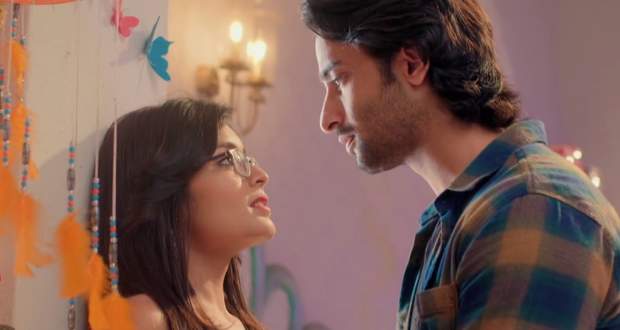 Today's YRHPK 28 Aug episode starts with Kunal and Kuhu arriving at the Maheshwari house for pag-phere ritual. Kuhu lies that she is happy while Varsha wonders why Kunal is so quite.

Meanwhile, Mishti gets delighted to see Abir near his car. Mishti comes downstairs and Kunal gets uncomfortable.

Kunal says he needs to leave for some urgent work. Later, Abir goes in Mishti’s room by making some excuse.

Abir continues to ask about her boyfriend while Mishti continues to ignore his question. Later, they get close and share some loving moments.

Mishti says if Abir gets successful in finding out about her boyfriend, she will go on a date with him. At the same time, Kunal tries to compare their marriage with a business deal.

Mishti kisses Abir on his cheek but at the same time, Rajshri calls out for them. She comes in the room and Mishti gets worried to see lipstick stain on Abir’s cheek.

Kunal instructs Kuhu to tell her family the truth and never to return to his home. Mishti sees Kuhu in distress and wonders why she is crying.

Kuhu does drama of being happy in front of everyone. Mishti wonders if Kuhu is upset or not.

Upcoming Yeh Rishtey Hai Pyaar Ke episode update: Kuhu wants Mishti to tell Abir she did a drama about being in love while Varsha wants to know the truth from Kuhu.

© Copyright tellybest.com, 2018 & 2019. All Rights Reserved. Unauthorized use and/or duplication of this material without written permission from tellybest.com is strictly prohibited.
Cached Saved on: Monday 27th of January 2020 09:51:08 AM