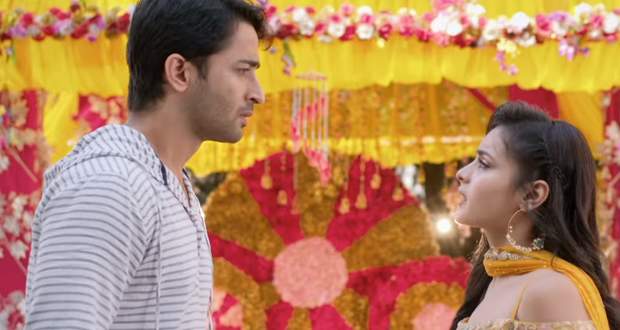 Today's YRHPK 28 Jan episode starts with Nishant arriving in a drunken state at Maheshwari house. He acts as if he is broken and doesn’t want Mishti to leave him.

He says he will never drink if Mishti stays with him. Later, the doctor treats Nishant while Jasmeet gets really upset with Mishti.

Nishant gains consciousness and gets out of control with the alcohol smell on his clothes. Meenakshi had made the master plan and asked Nishant to act drunk.

Abir arrives with the medicine and wonders how Nishant changed his clothes. Elsewhere, Kunal thinks Nishant should not marry Mishti in such a state.

Mishti asks Kunal to leave with Abir while Jasmeet seeks answers from Vishambhar. Jasmeet creates a scene as she can’t see Nishant in such a state.

Mishti announces that the wedding will commence on the same day and wishes to talk to Abir for the last time. Mishti wants to leave Abir while Abir asks her to elope with him.

Mishti thanks him for always supporting her and says an emotional goodbye. Later, Abir finds Nishant walking on his balcony and gets suspicious.

He decides to find out about Nishant’s blood reports. Meanwhile, Meenakshi knows his son and decides to change Nishant’s reports.

Nishant is also scared and books two tickets to London. Later, Kuhu accuses Mishti of not caring for Abir while Mishti again needs to explain that she cares about her family.

Meenakshi takes the reports of Nishant and asks to not tell anyone about his reports. However, Abir finds those reports on the floor.

Upcoming Yeh Rishtey Hai Pyaar Ke episode update: Abir declares that he will expose Nishant in front of everyone.

© Copyright tellybest.com, 2018 & 2019. All Rights Reserved. Unauthorized use and/or duplication of this material without written permission from tellybest.com is strictly prohibited.
Cached Saved on: Thursday 30th of January 2020 07:46:48 PMCached Disp on: Thursday 20th of February 2020 10:45:58 AM