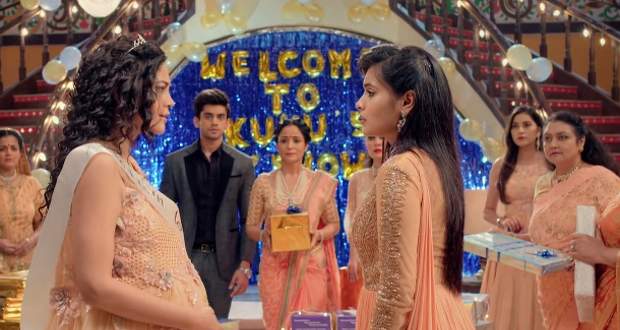 Rajshri wants Varsha to talk to Kuhu but she refuses to interfere in the matter. Meanwhile, Mishti is devastated and thinks the baby will not be connected to her.

Abir gives her a diary to write anything she wants to tell the baby. Mishti is happy to find the sonography scan in the diary and talks to her baby.

In the morning, Kuhu prepares for the baby shower and doesn’t take Mishti’s ideas. Meenakshi wants Kuhu to let Mishti give ideas but Mishti is okay with not being a part of the preparations.

Abir asks Rajshri to help him with his plan. Later, Varsha refuses to go while Rajshri and Jasmeet reach the Rajvansh house. They find only Kuhu’s photographs while Kunal also doesn’t like Mishti getting sidelined.

Kuhu reveals that Mishti didn’t have any problem with the decoration. Kuhu wishes to eat Ghevar while Varsha surprises her with the Ghevar. Kuhu thinks she has come for her only while Varsha has come because of Mishti’s convincing.

Mishti gives a dress to Kuhu while Kuhu thinks Mishti is making her realize that she won’t be the mother of the baby. Later, Mishti is surprised by the Godbharai rituals upstairs in the Rajvansh house.

Meenakshi performs the rituals while Rajshri sings a song for her. Everybody rushes upstairs listening to the song while Kuhu also goes upstairs and gets shocked to see Mishti getting all the attention.