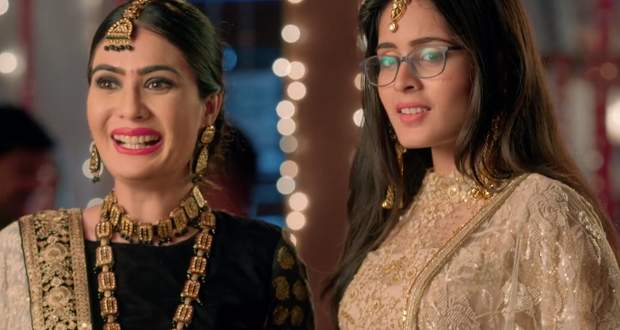 Today's YRHPK 29 Jul episode starts with Mishti trying to tell him she loves him indirectly at first. She confesses her love to Abir but he doesn’t listen to a single word.

Meanwhile, Parul tells Abir that Meenakshi is trying to spoil Kunal and Kuhu’s relation. She also tells him about Shweta’s arrival being Meenakshi’s plan.

Abir wants to confront his mother but Parul stops him as she fears of getting escorted from the house. The whole scene turns out to be a dream and she decides on not telling him the truth.

Kunal gets mad at Kuhu for getting caught. He further says to stay away from his plans and not to help him anymore.

Mishti reaches Rajvansh house to meet Abir. She tries to tell him her feelings but Kunal interrupts them.

Further, Meenakshi comes and asks her to help her with Kuhu’s choice. She asks her to choose a wedding setup which Kuhu will like.

Mishti decides to express her love in the Sangeet function. Meanwhile, Meenakshi gets upset with Kunal for getting angry with Kuhu.

Later, the Sangeet function starts and everybody is excited about the big celebration. Meenakshi asks why Kuhu is upset.