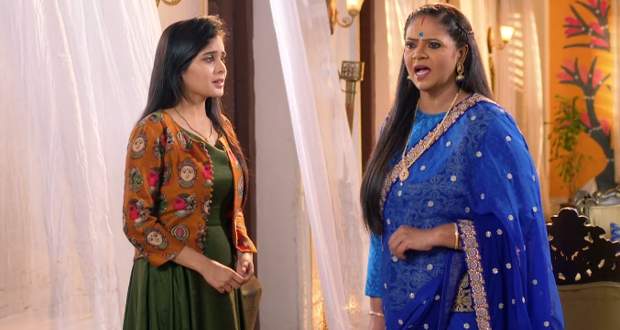 Today's YRHPK 29 Jul episode starts with Kaushal not believing that Ketki is pregnant. Ketki apologizes while Nidhi gets mad at her for spoiling her name.

Nidhi continues to blame Ketki and also slaps her. Abir tries to shut everyone’s mouth and supports Ketki. Mishti offers to console Nirmala while Abir doesn’t want her to go.

Varun asks Mishti to not come with him while Abir and Kaushal decide to talk to Nirmala. Later, Meenakshi blames Mishti for breaking her family and taking Abir away from them.

She asks her about their problem while Mishti tries to explain herself. Meenakshi continues to ask her while Mishti remembers the promise made to Abir and refuses to tell anything. Meenakshi is still adamant to find the truth.

Nirmala insults Ketki and thinks women need to stay in their limits. Abir gets angry with her and is not happy with society blaming just women. He asks Varun to share the load with Ketki as he is also responsible.

Meenakshi learns that the number belongs to Varun Soni. Meanwhile, Abir makes Nirmala understand that whatever she says about Ketki applies to Varun as well.

Varun takes Ketki’s side and wants to marry her even if he has to leave the house. Meenakshi calls Varun’s landline number and wants to find out the truth.

Later, Kaushal and Abir reveal that Nirmala is ready to get them married. Ketki apologizes for everything and the family gets really happy.