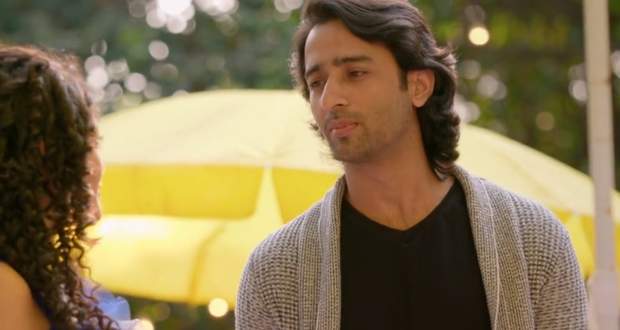 Today's YRHPK 29 Oct episode starts with Mishti hearing all negative things about Mehul from Panditji. She further asks his address while Mehul is searching for the person investigating him.

Meanwhile, Meenakshi asks Abir to settle everything before going. Abir says he will carry out his responsibilities after leaving the house too.

Mishti reaches Mehul’s old house and enters the house. Mehul also arrives and sees hand marks on the door. At the same time, Kuhu enacts talking to Kunal but her phone rings.

She manipulates the situation but is worried about Kunal not arriving. Meanwhile, Mishti is searching for some clues in Mehul’s house.

Her phone rings and Mehul deduces someone is inside the house. She again tries to search but has to hide after hearing some voice. Later, Abir offers to help Kuhu in shopping for Karwa Chauth. He also says he will gift anything she likes in the boutique.

Abir also decides to buy a gift for Mishti while she is hiding from Mehul in his house. Mishti escapes the house when Mehul gets distracted.

Mehul finds Meenakshi’s bangles which were given to Mishti. However, Mehul doesn’t know it and thinks it was Meenakshi.

Kunal finds Kuhu with a man in a restaurant. The man says he will make a story on Kunal not showing up on Karwa Chauth. Kunal gets angry with Kuhu and leaves.

Upcoming Yeh Rishtey Hai Pyaar Ke episode update: Abir gets angry at Mishti for not trusting him and investigating his father.